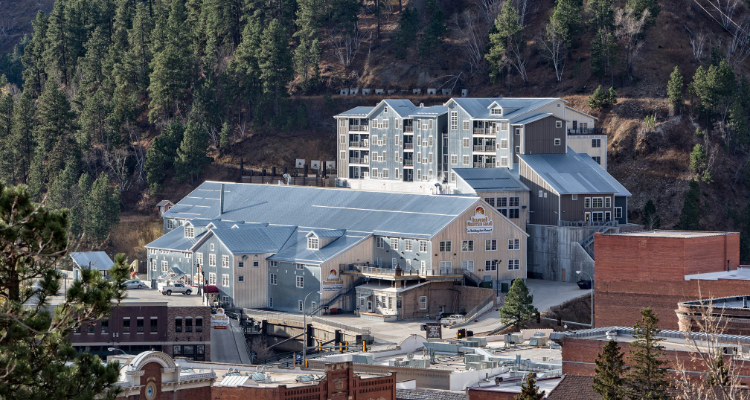 DEADWOOD, SD. | BY JIM HOLLAND, RAPID City Journal (AP) — The Deadwood Mountain Grand, an entertainment and lodging resort overlooking the heart of downtown Deadwood, is up for sale, with an asking price of $27.5 million.

The resort also boasts 10,000 square feet of meeting space, fitness facility, indoor swimming pool and Jacuzzi, a three-story parking garage with 220 spaces and, according to sale literature, “the only resort-based spa and salon in the Black Hills.”

Nate J. Greene, executive vice-president of the Nashville, Tenn., office of Colliers, International, a real estate services and investment management firm, told the Rapid City Journal that the current owner Dale Morris of Nashville hopes to find a partner to take a majority ownership role in the resort.

“That would be the goal,” Greene said.

“He (Morris) would love to stay involved in the Deadwood Mountain Grand, with a purchaser that would come in and be the operator. Dale wants to be the silent partner,” Greene said.

In 2010, Morris, a longtime powerbroker in the Nashville music industry, and a number of other investors formed an LLC to redevelop the former Homestake gold processing plant into an entertainment venue.

The loans were made through the South Dakota arm of a federal government program known as EB-5, which is shorthand for the employment-based fifth preference visa.

At the time of the Deadwood Mountain Grand deal, foreigners who invested at least $500,000 in a U.S. project that supported at least 10 jobs could earn the EB-5 visa and eventually a permanent residency green card for themselves and their families.

The EB-5 program became mired in public controversy in 2013, when Richard Benda, a former state government official who worked closely with EB-5 projects, was found dead of what was ruled a suicide.

It was later revealed that Benda had been facing a potential indictment for his alleged theft of $550,000 in state grant money that was intended for a meatpacking plant supported by EB-5 investments in Aberdeen.

With the state EB-5 program in disarray, Chinese investors filed suit in 2016 seeking return of millions in loans made to build the resort.

In 2018, Morris settled the suit, repaying more than $32.5 million in loans overseas investors had made to the LLC.

He later bought out other original members of the LLC and formed his own corporation, ZCN LLC, to operate the resort.

“All that’s behind us,” Greene said of the financial and legal issues.

“We’ve got new management in place. Dale is the sole owner and things are just getting better and better,” he said.

There is no urgent timetable to get the property sold, Greene said.

“We’ll take whatever time we need to find the right situation,” he said.