‘Don’t Step on a Bee’ day reminds that bees are vital, and in decline 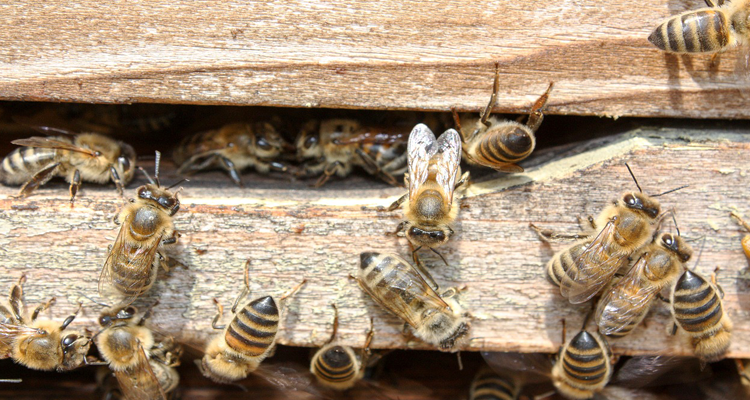 ‘Don’t Step on a Bee’ day reminds that bees are vital, and in decline

On this ‘Don’t Step on a Bee Day’ we wanted to focus on reminding people that they shouldn’t willingly step on bees and shouldn’t harm them, if possible. Instead we need to be taking steps to protect and care for bees.

Besides getting killed by people stepping on them or hitting them with fly swatters, bees need protection because they are facing many obstacles to their survival. Bees are being killed by insecticides, face threats from Asian hornets, chemical exposure, and are also being affected by air pollution.

The bees are in decline

Recent decades have seen an extraordinary decline in honey bee colonies across the world. Since the 1990’s beekeepers have been observing the mysterious and sudden disappearance of bees.

Three of the main reasons for the bee decline is widespread use of industrial pesticides, arrival of the varroa mite and loss in the number of wildflower foraging areas.

Bees are the world’s largest pollinators and there are 20,000 species of them. Bumblebees and honeybees have bodies specifically made for collecting pollen, with fine hairs that the pollen gets stuck to. The bees then transport the pollen. Pollination makes the food that we eat grow, and one third of the food daily relies on pollination! This includes fruit, vegetables, oils and nuts. This is just one of many benefits that bees bring humans, along with the making of products such as honey and beeswax.

Bees also pollinate foods eaten by other animals and birds. domesticated animals, such as cows also benefit from pollination too – they eat alfalfa which is pollinated by bees.

It is not only flowers and food crops that are pollinated by bees, but trees also need bees!

Many (though not all) trees are pollinated by bees (and other insects). Trees which in turn, support much wildlife, help stabilize soil structure, and produce the air we breathe! while the end of bees doesn’t likely mean the end trees, it could play a part.

Albert Einstein is sometimes quoted as saying, “If the bee disappears from the surface of the earth, man would have no more than four years to live.” it’s highly unlikely that Einstein said that. But there is some truth in the famous misquote.

Bees and humans have been through a lot together. people began keeping bees as early as 20,000 bce! beekeeping likely predates the dawn of agriculture, which occurred about 12,000 years ago, and likely made farming possible.

If honeybees were to disappear for good, humans would probably not go extinct (for only that reason), but our diets would still suffer tremendously and the variety of foods available to us would diminish. Something along the lines of half the amount of fruit and vegetables would likely be available at your local grocery store.

The cost of certain products would surge. Coffee would be a good example of this, as without bees, it would become expensive and rare. The reason being that the coffee flower is only open for pollination for three or four days. If no insect happens by in that short window, the plant wouldn’t  be pollinated.

Small animals that rely on plants for sustenance would likely be negatively impacted as well. resulting in fewer prey for larger carnivorous species, which would also send shockwaves up the food chain.

For so long humans have relied on bees for their incredible food-producing superpowers and the byproducts of their laborious work. Now it’s the bees who need help, and it’s our turn to help them.

Consider avoiding harmful pesticides, fertilizers, and herbicides and instead treat your garden with organic pesticide options.

Plant a bee-friendly flower garden in your backyard. avoid hybrid flowers and double flowers, which are sterile, and planting flowers in patches.

Consider starting your own honey bee hive in your backyard.

Or, at the very least try to not kill a bee, or stop on one…it may come back to bite you in ways you haven’t considered.