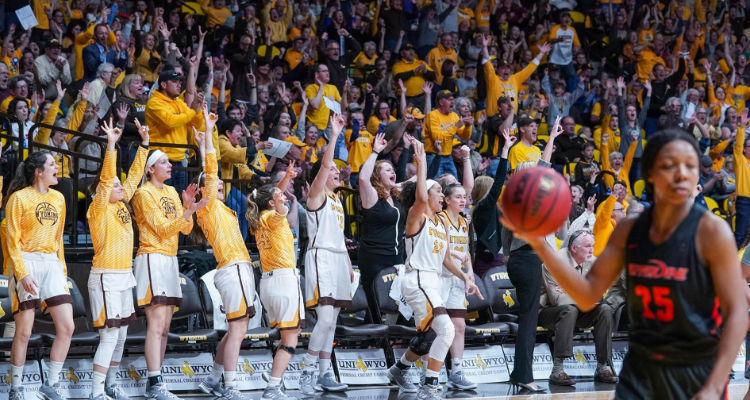 LARAMIE, WY. – With the game tied at 60 and just nine seconds to play, Cowgirl freshman Karla Erjavec sank a clutch free throw that proved to be the game winner, and Wyoming (25-8, 13-5 MW) moved past Pepperdine (22-12, 12-6 WCC) and into the quarterfinals of the WNIT.

“We talk this time of year about advancing, and I know everybody uses the term, ‘survive and advance,’” said head coach Joe Legerski. “In any postseason run, you have to find a way to win. It may end up being from defense, and it may be from a player you didn’t expect.”

The crowd of 5,134 Cowgirl fans in the Arena-Auditorium is the 10th-highest attended game in Cowgirl history, and they were treated to a nail-biter.

This is the second time the Cowgirls have reached the quarterfinals in the WNIT, joining the 2007 squad that won the WNIT title that year. Additionally, the 25 wins are tied with the 1978-79 team for the second most in a season in Cowgirl history, behind only that 2007 team’s 27 wins.

“I’ve talked all along about what’s made this team magical is the senior leadership and the talented freshman,” Legerski said. “For a large stretch of that second half, we had three freshmen on the court, and they delivered. They play with so much confidence. Karla Erjavec does not want to quit playing.”

Senior Bailee Cotton led the Cowgirls offensively with 15 points and defensively with three blocks and a steal. It is the 11th game this season the Mountain West Defensive Player of the Year has recorded multiple blocks.

Senior Sladjana Rakovic was key late with strong rebounds, as she led the Cowgirls by collection eight caroms, including a key offensive rebound late in the game. She also added six points and an assist.

Freshman Karla Erjavec scored eight points, none bigger than her last, and dished out a team-high three assists. Junior Taylor Rusk added nine points, four rebounds and a pair of assists on the night.

The Cowgirls had nine assists on the night to only four turnovers.

The Waves were led by Yasmine Robinson-Bacote, the West Coast Conference Player of the Year, as she scored a game-high 26 points. Rose Pflug added five points off the bench, and Malia Bambrick had nine points and a pair of assists.

The Waves struck first with reverse layup, but Gomez answered down low with a score of her own. Cotton ended a two-minute Cowgirl scoring drought, but the Waves held the early 6-4 lead with 6:01 to play in the opening period. After a Pepperdine jumper, the Cowgirls went on an 11-0 run to end the quarter, highlighted by a Cotton and-one that brought the crowd to its feet. During the run, freshman Tereza Vitulova contributed a three, and Rusk scored a layup at the buzzer. The Cowgirls led, 15-8, after one quarter.

Rusk found freshman Quinn Weidemann in the corner for a three to start the second frame. After a Rusk layup, the Waves scored a free throw to end more than seven minutes with a point. Cotton ended a 10-2 Waves run with a layup, and the Cowgirls held a 24-18 lead with 3:44 to play in the first half. Rakovic scored on an inbounds play with 2 seconds in the half, and the Cowgirls took a 30-24 lead into the locker room at the break.

Both teams traded a free throw to start the second half, before the Waves scored four in a row to bring it within two, 31-29, with the Cowgirls leading. Wyoming responded, outscoring Pepperdine 8-4 heading into the media timeout to build the lead back up to six points, 39-33, with 4:20 to play in the third quarter. However, out of the break, the Waves used a 6-0 run to tie the game at the 1:39 mark. After the Cowgirls got a layup from Weidemann, the Waves answered with a three. With just eight seconds to play in the quarter, Erjavec found Rakovic for a pick-and-roll layup to take the lead, 43-42, into the fourth quarter.

Vitulova scored a turnaround layup to star the final frame, and after a stop, Vitulova scored on the block again to make it 47-42 for the Cowgirls. The Waves responded and scored five straight to tie the game for the third time. The freshman duo of Vitulova and Erjavec scored the next five points in the game, sending all 5,134 fans in the AA to their feet and forcing a Pepperdine timeout with 7:06 to play in the game with Wyoming leading, 52-47.

Rusk stopped a 4-0 Waves run out of the break with a driving layup. The teams traded buckets until a Cotton jumper and a pair of Rakovic free throws pushed the lead back to six, 60-54, at the 2:53 mark.

The Waves scored four in a row to make it a one-possession game, 60-58, before Cotton was fouled with 38 seconds to play. She missed both free throws, and the Waves called timeout. Robinson-Bacote grabbed an offensive rebound and scored it, tying the game at 60 with 25.8 seconds to play.

The Cowgirls called time, and after the break, Erjavec was fouled with 9.7 seconds as she drove to the basket. She made 1-of-2, and the Waves called time after getting the rebound. The Cowgirls had two fouls to give before entering the bonus, and they wisely used them to take time off the clock.

With less than a second to go, Pflug put up a shot for the Waves that rattled off the rim and was corralled by Rakovic, and the Cowgirls won at the buzzer, 61-60.

The Cowgirls will face Arizona in the fourth round of the WNIT in Tucson on Sunday, March 31, at 3 p.m. (MT).