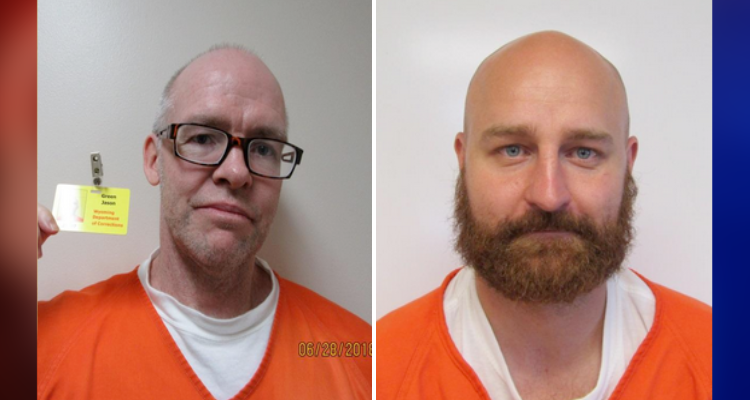 Inmate Robert Simpson remains at large and is potentially still in the Mesquite and greater Dallas/Fort Worth area.

According to a public safety announcement on the Mesquite Police Department’s Facebook page, police responded to a suspicious person call in the early morning hours of Sunday, September 29. Police observed two individuals running from the location on foot. Green was captured but the other individual (believed to be Simpson) got away.

Simpson and Green escaped from the Wyoming Honor Conservation Camp in Newcastle, Wyoming on Sunday, September 22. It is believed the inmates stole a city truck in Newcastle and drove to Laramie, Wyoming that night. They abandoned the truck at a roofing company in Laramie and may have stolen a black Subaru near that location.

Simpson is five foot, ten inches, approximately 165 lbs, blond hair and blue eyes. He is 30 years old. He has a scar on the bridge of his nose, on right forearm, and on the left hand. He has a tattoo of a domino and hell cat on his right arm with other tattoos on his chest, abdomen and back. He was last seen with a beard and sometimes has black eye glasses.

Texas authorities have asked that anyone with information about the location of Robert Simpson is asked to call Crime Stoppers at (214) 373-TIPS; or contact the Mesquite Police Department
at 972-285-6336.

It’s not certain at this time when Green will be returned to Wyoming and what additional charges he will face.