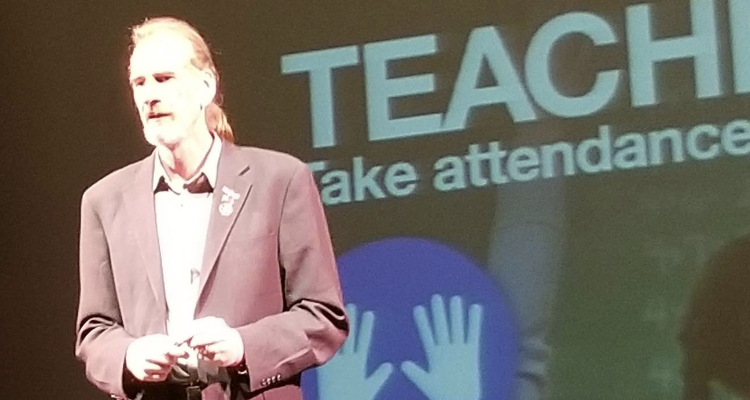 Rock Springs, WY.    –   The father of a school shooting Victim spoke on Wednesday morning to a packed audience at the Western Wyoming Community College’s theater. John-Michael Keyes of the “I Luv U Guys” Foundation spoke at length about school, student, and law enforcement response to school shooting situations.

Tragically, Mr. Keyes and his wife, A.J. DeAndrea Keyes, share a special perspective – on September 27, 2006, their 16-year-old daughter Emily was taken hostage, then murdered by a school shooter at the Platte Canyon High School in Bailey, Colorado.

While she was a hostage, Emily sent her parents these last text messages: “I love you guys” and “I love u guys. k?”

In the aftermath, the Keyes created the “I Luv U Guys” Foundation, whose mission is to “restore and protect the joy of youth through educational programs and positive actions in collaboration with families, schools, communities, organizations and government entities.”

The Foundation also offers a broad range of training and information on its extensive website at http://iloveuguys.org/

“I attended Wednesday morning, and I have heard Mr. Keyes speak on several occasions,” Sweetwater County Sheriff Mike Lowell said. “Many of my staff members were also there, as were law enforcement officers from other agencies. His talks are heartbreaking, but at the same time they are extremely utilitarian, offering solid, readily-implementable strategies and protocols. His experience renders insights that only a parent who lost a child can provide.”

Lowell said he wanted to make people aware that Sweetwater County School Districts #1 and #2 have worked in depth with organizations like the Foundation – and with local law enforcement – in establishing their own protocols and procedures.

“I am confident in knowing that Sweetwater County School Superintendents Kelly McGovern and Donna Little-Kaumo and their school boards have taken the lead in recognizing and interacting effectively with the working partnership I share with Chief Dwane Pacheco of the Rock Springs Police Department and Chief Tom Jarvie of the Green River Police Department in developing our protocols and strategy regarding to critical incidents at our schools.

“And Karla Leach, President of Western Wyoming Community College, continues to be on the cutting edge of these issues at WWCC. I take special pride in working alongside these education professionals to promote the safety and security of our K-12 and college students and, on a personal note, I take comfort in knowing that my own school-age grandchildren are that much safer for it.”