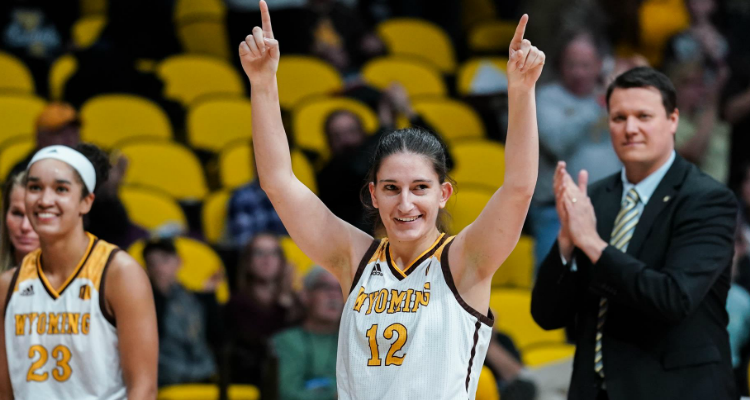 “Another game, and there was nothing easy about it,” said veteran Cowgirl head coach Joe Legerski. “Idaho puts so much pressure on you offensively. Those two guards can score form 24 or 25 feet out, and they’re looking and comfortable to shoot it. I thought defensively, our perimeter players did a tremendous job. Quinn (Weidemann), Taylor (Rusk), Karla (Erjavec) and Clara (Tapia) really stepped up.”

Idaho – who came into the game ranked first in the country in fewest turnovers per game at 10.8 – ended the game with 17 turnovers, which is a season-high for the Vandals. This was in large part due to Wyoming’s scrappy defense that came up with 11 steals.

Senior Bailee Cotton and junior Taylor Rusk led the way offensively for the Cowgirls, pouring in 13 points each. Freshman Quinn Weidemann scored 11 points off the bench on 4-of-6 shooting. Senior Marta Gomez scored 10 points, which put her at exactly 1,000 career points for the forward from Valles, Spain. Senior Clara Tapia added a season-high eight points for the Cowgirls.

“I’m happy for Marta,” Legerski said. “A thousand points, that’s not easy. Today, one of the biggest things is they made sure that Marta was not going to get a look at three. To Marta’s credit, she didn’t force anything, she stayed in the system and comes up with her 1,000th point on a muscle play to get the ball up and inside. That just shows the development of Marta and her patience as a player to get double digits when somebody’s taking away what you do best.”

Tapia and Rusk combined for seven assists and just one turnover, while Cotton and Gomez combined for 15 of Wyoming’s 28 rebounds with eight and seven boards, respectively. Cotton now has at least one offensive rebound in 11 consecutive games dating back to last season, and Tapia has multiple assists in nine-consecutive games.

Defensively, Rusk and Weidemann each had three steals for the Cowgirls while Gomez added a pair of blocks and a team-high seven defensive rebounds. Additionally, Cotton brought the crowd to their feet with strong one-on-one perimeter defense on Idaho’s top scorer that ended with a Cowgirl steal.

“If there was one play in today’s game that showed the commitment we had was Bailee got isolated on arguably their best player, and they’re trying to clear her out and let her take Bailee,” Legerski said. “Bailee hung in there, and that’s one of the adjustments we made because I feel comfortable with Bailee on the perimeter, and Bailee came up with a deflection and a steal. The crowd just went and really gave Bailee credit for that effort.”

Idaho was led by Mikayla Ferenz’s 18 points and four made three pointers, while Taylor Pierce and Natalie Klinker both reached double-digit scoring with 14 and 10 points, respectively.

Tapia used a nifty crossover to get the rim for a layup to open the game’s scoring. The teams traded threes until a 6-0 run courtesy of Erjavec and Gomez gave Wyoming an 11-6 lead heading into the media timeout with 4:26 remaining in the frame. While the Vandals went the final 7:16 of the quarter without a point, the Cowgirls opened up an 18-6 lead, highlighted by an old-fashioned three-point play from Weidemann and a buzzer-beating jumper from Tijana Raca.

Idaho finally scored to open the second quarter, but Weidemann answered with a three. It took Idaho less than three minutes in the second quarter to score more than they did in the first frame, but the Cowgirls’ offense kept pace. After a Rusk corner three, Idaho took a timeout trailing 28-13 with 6:57 left in the second period.

Later, Weidemann ended a quick Vandal 6-0 run with a jumper off an out of bounds play. While the Vandals had a stretch of making five-of-six field goals in the middle of the quarter, Rusk kept them at bay by converting an and-one play, retaining Wyoming’s double digit lead, 35-24. The Cowgirls withstood Idaho’s hot three-point shooting in the second quarter – they went 6-of-7 from deep in the frame – and Wyoming took a 41-30 lead into halftime.

Idaho started the third quarter with another three and a layup, while the Cowgirls missed their first four shots of the half. Tapia ended Wyoming’s drought with a pull-up jumper from the free throw line, keeping Wyoming up 43-35. A Gomez jumper made the score 47-40 at the third quarter media timeout with 4:57 left in the frame. Later, Erjavec ended a 2:16 Cowgirl scoring drought by finishing a fast break layup started by a Rusk steal to put UW up 53-47 at the end of the third quarter.

Cotton drilled an elbow jumper to open the fourth frame, and Gomez followed by muscling in a layup in the post for her 1,000th career point that put Wyoming up 57-47. Legerski called timeout following the basket, and the crowd applauded Gomez’s achievement. Timely scoring from Cotton and Tapia gave Wyoming a 63-51 lead with 5:05 remaining in the game. After an offensive rebound, Ferenz hit a deep three to bring the Vandals within seven, 63-56, before she hit another corner three to make it a 63-59 game with 1:56 remaining, as Idaho was on an 8-0 run.

Legerski called a timeout with 1:04 left and Wyoming in the midst of a 4:01 scoring drought. After a Cowgirl miss, Idaho scored a layup, bringing the score to 63-61. With the shot clock and game clock even, Idaho fouled Cotton with 14.1 seconds remaining, and she went 1-of-2 at the line. Idaho called timeout, trailing 64-61. Gomez blocked Idaho’s last-ditch three-point effort, and the Cowgirls took a 64-61 win.

The Cowgirls return to action on Thursday, Dec. 20, when they host South Dakota State for a game at 6:30 in the Arena-Auditorium. It will be Wyoming’s last game before entering Mountain West play.