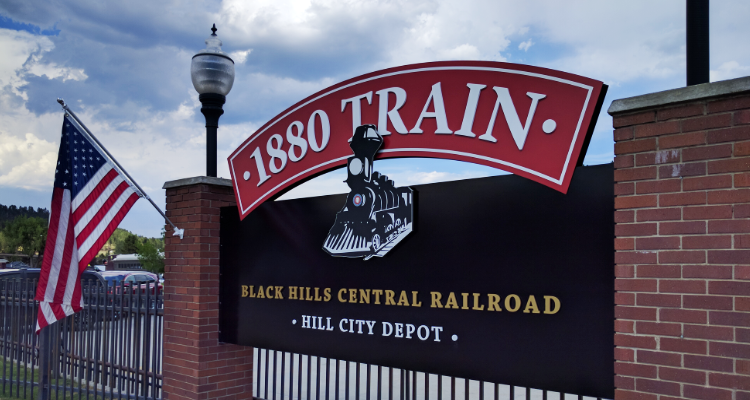 RAPID CITY, SD. | By TANYA MANUS, Rapid City Journal (AP) — A little boy who always dreamed of getting a train for Christmas finds himself on a magical adventure — with a distinctly Black Hills twist — in a new book starring the 1880 Train.

“Marlon McDoogle’s Magical Night” introduces readers to 12-year-old Marlon, who’s waiting for a Christmas surprise his grandfather promised him. However, Marlon could never predict what would happen when his grandfather arrives on Christmas Eve and tells the boy, ‘We have lots of work to do!’” The pair drives off in Grandpa McDoogle’s old truck for an unforgettable encounter with visitors from the North Pole and a wild ride aboard the 1880 Train.

The book is the latest project from Sean Covel of Deadwood. He’s the producer of films including “Napoleon Dynamite” and the author of “Porter the Hoarder” books that were recently distributed in elementary schools throughout South Dakota, the Rapid City Journal reported.

Seven years in the making, “Marlon McDoogle’s Magical Night” was inspired by a conversation between Covel and Meg Warder, president of Black Hills Central Railroad.

“I thought it would be great if we could have a Christmas story for the 1880 Train,” Warder said. “Seven years later, it’s come to fruition. It’s exciting. Maybe it will be a movie someday.”

Christmas and trains have paired up in popular holiday tales such as David Baldacci’s “The Christmas Train,” Edward Marston’s “A Christmas Railway Mystery” and Chris Van Allsburg’s beloved “The Polar Express.” Coming up with an original plot was a challenge, Covel said.

“Trains spark nostalgia, like Christmas,” Covel said. “I was thinking, ‘What’s cooler than riding a train to North Pole? Flying a train!’”

Covel developed the story line and wrote “Marlon McDoogle’s Magical Night.” His Christmas train story offers a fresh explanation for how Santa Claus actually manages to travel around the world in one night.

The plot weaves in Hill City, the 1880 Train and Mount Rushmore along with a hefty dose of Christmas Eve magic. With Warder’s help, Covel even incorporated some local residents into the story.

No Christmas story is complete without a bit of inspiration. While Marlon is having an adventure, he learns that everyone can choose to do and be more than they ever thought possible.

“I wanted to embed deeper themes,” Covel said. “Marlon wants this object (as a Christmas gift), but then he goes on this crazy adventure and understands the most important things are experiences with family.”

The book’s “beautiful but complex” illustrations were created by artist Diego Velasquez. Velasquez is from Columbia and had never seen snow, Covel said. Velasquez created the illustrations with the aid of photos of the 1880 Train and of snow.

“Marlon McDoogle is almost a graphic novel for families. The illustrations are done in a cinematic way but also they’re painterly with kind of a magical twist,” Covel said.

The book was years in the making in part because Velasquez was also working on the Marvel Comics movies “The Avengers” and “Black Panther,” Covel said.

“Marlon McDoogle’s Magical Night” takes Covel back to his own childhood in Edgemont and his father’s 40-year career as a conductor for the Burlington Northern Railroad.

“I hear a train’s whistle and it brings back nostalgia and peace and happiness, and that’s what Christmas is, as well,” Covel said.

The book was published and released in early December. It’s currently available exclusively at the 1880 Train’s Hill City gift shop and on Amazon. The community’s response to “Marlon McDoogle’s Magical Night” has already been positive, Warder said.

“The book is absolutely bigger and better (than what I imagined). I was pleasantly surprised. It’s taken a lot of time and we’re excited about it,” she said.