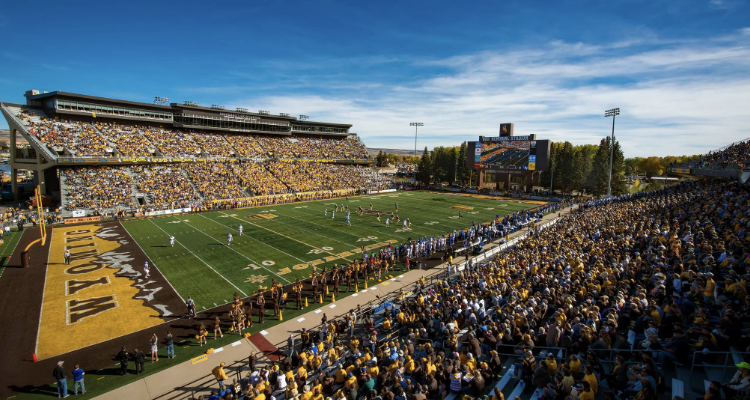 LARAMIE, WY.  –  The Wyoming Cowboy football team will return home to War Memorial Stadium on Saturday to host the Utah State Aggies in a Mountain West Conference contest that will kick off at 12:30 p.m. It will be the first and only home game for the Cowboys in the month of October.

A new tradition was incorporated into a century-old rivalry in 2013 when the Wyoming Cowboys and Utah State Aggies introduced a new “Bridger’s Battle” tradition to the football series between the two schools. As part of the new tradition, a traveling “Bridger Rifle” is awarded to the winner each year. The rifle is a .50-caliber Rocky Mountain Hawken rifle that was popular among mountain men of the 1800s, and is widely-considered to be the rifle carried by the legendary Jim Bridger. “Bridger’s Battle” was chosen as the name for the new series due to Bridger’s ties to the Wyoming-Utah region. The Bridger’s Battle portion of the series now stands at 3-2 in favor of Utah State.

Wyoming’s series with Utah State will be renewed for the 69th time this week. That ranks as the fifth longest series vs. any opponent for the Wyoming Cowboys behind only Colorado State (110th meeting in 2018), Utah (83 meetings), BYU (78 meetings) and New Mexico (71st meeting in 2018).

Wyoming will enter Saturday’s game with a 2-5 overall record and an 0-3 record in the Mountain West. Utah State is 5-1 overall and 2-0 in the conference.

Challenging Schedule
Wyoming has played one of the nation’s most difficult schedules to date. Among all 129 Football Bowl Subdivision (FBS) teams, Wyoming’s schedule is ranked by NCAA.org as the 36th most difficult. UW’s schedule is ranked No. 2 in the Mountain West behind San Jose State’s and is the 13th most difficult among Non-Autonomous Five (or Group of Five) programs. The opponents the Cowboys have played thus far this season have a winning percentage of 63.2 percent and a combined record of 24-14.

Saturday’s game versus Utah State will be the seventh time in the eight games the Cowboys will have played this season where UW will face a 2017 postseason team. Each of Wyoming’s first five opponents this season — New Mexico State, Washington State, Missouri, Wofford and Boise State — appeared in postseason last season. Wyoming’s opponent in Week 6, Hawai’i, didn’t play in a bowl in 2017, but had a 5-1 record at the time the Cowboys played them. Fresno State won the 2017 Hawai’i Bowl and Utah State appeared in the 2017 NOVA Home Loans Arizona Bowl. While Wofford, Wyoming’s opponent on Sept. 15, is not an FBS program it did post a 10-3 record in 2017 and advanced to the National Quarterfinals of the NCAA Football Championship Subdivision (FCS) Playoffs.

Outstanding Individual Performances
Wyoming has several individuals who are having outstanding seasons. Senior running back Nico Evans continues to rank among the best in the nation. He will enter Saturday’s game ranked No. 1 in the Mountain West and No. 15 in the NCAA in total rushing yards, with 670.

Another Cowboy defender who has come on strong the last three games is junior safety Alijah Halliburton. He has led the Pokes in tackles in two of the last three games, making 11 tackles vs. Boise State and eight vs. Fresno State. Halliburton currently ranks No. 3 on the team in tackles this season with 37. He is sometimes inserted into Wyoming’s defense alongside senior safeties Wingard and Marcus Epps in passing situations, and also rotates with those two seniors to provide them some rest.

Junior place-kicker Cooper Rothe remains perfect on the season. He is 9 of 9 in field goals this season, has made his last 12 consecutive field goals dating back to last season and has made 24 of 27 attempts (88.9 percent) over the past two years.

Radio Coverage of Saturday’s Game
Saturday’s game will be broadcast on AM 1240 KASL beginning with the pregame show at 11:30 a.m. on Saturday.