Hot Shooting In First Half Lifts SDSU Past Cowboys 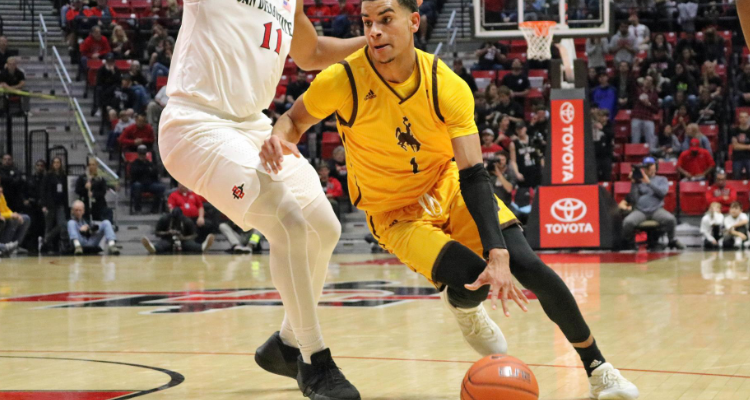 Hot Shooting In First Half Lifts SDSU Past Cowboys

SAN DIEGO, CA. – The Wyoming Cowboys ran into the best three-point shooting team in the Mountain West on Tuesday, as the San Diego State Aztecs shot 50 percent from behind the arc in a 84-54 win over the Pokes inside Viejas Arena in San Diego, Calif. Wyoming falls to 4-12 overall and 0-3 in MW play with the Aztecs moving to 9-6 overall and 1-1 in the conference.

“I told the team we have a commitment to zone defense and that worked very well against UNLV, but SDSU has guys capable of making shots,” UW head coach Allen Edwards said. “We struggled to make them play inside the three point line. They made some early threes and extended a lead and we did not have the fly back mentality tonight like we have had before.”

Wyoming was led in scoring by senior guard Justin James. He added 18 points for the Pokes and grabbed a team-best six rebounds and three assists. James moved into the Top-10 in Wyoming history in career made field goals, he has 565 in his career passing Harry Hall.

Redshirt freshman Hunter Thompson added 11 points for Wyoming. He went 4-of-6 from the field and 3-of-4 from behind the arc. Freshman Trevon “TJ” Taylor added 10 points going 4-of-7 from the field. Walk-on KC Henry of Lingle, Wyo. made his first appearance for the Pokes grabbing a rebound.

The Aztecs got out to a fast 12-2 start on the Pokes opening the game 4-of-5 from the field. Matt Mitchell hit two three-pointers for the Aztecs to open the early lead for SDSU.

San Diego State continued the hot shooting building a 30-14 lead with just under seven minutes left in the first half. SDSU was 6-of-7 to that point from behind the three-point line. Wyoming struggled from the field shooting 33 percent going 6-of-18.

SDSU finished the first half shooting 60 percent from behind the arc going 9-of-15. The Aztecs were 17-of-29 from the field for 59 percent taking a 48-25 lead into the break. Wyoming was 9-of-25 from the field for 36 percent with the Aztecs owned a 21-8 advantage on the boards in the first 20 minutes.

“When we were down we told the team to play our brand and we needed to put multiple stops together and put solid possessions together, but we struggled to do that tonight,” Edwards said. “Our guys are learning how to play that way. We have to go back to the drawing board and keep moving.”

After Thompson opened the second half with a three-pointer for the Cowboys, the Aztecs followed with two triples of their own would build 57-29 lead with 17:39 left in the game.

James would score five-straight points with Porter adding four and Taylor and Young added two as part of a 13-3 run to make it a 60-41 game with 12:04 left in the contest. Wyoming held the Aztecs scoreless for nearly three minutes during the surge.

Wyoming would then go scoreless for 5:32 with the Aztecs building the lead to 75-45 with just over five minutes remaining. SDSU would continue momentum, as they scored over 70 points against the Pokes for the first time in three games for the 84-54 win.

SDSU had four players in double-figures for the night. Jalen McDaniels led all scorers with 22 points on the night. He also finished the night with 10 rebounds. Mitchell added 20 points going 4-of-4 from behind the arc.

The Cowboys return to action Saturday hosting Utah State in the Arena-Auditorium for a 4 p.m. start on AT&T SportsNet.