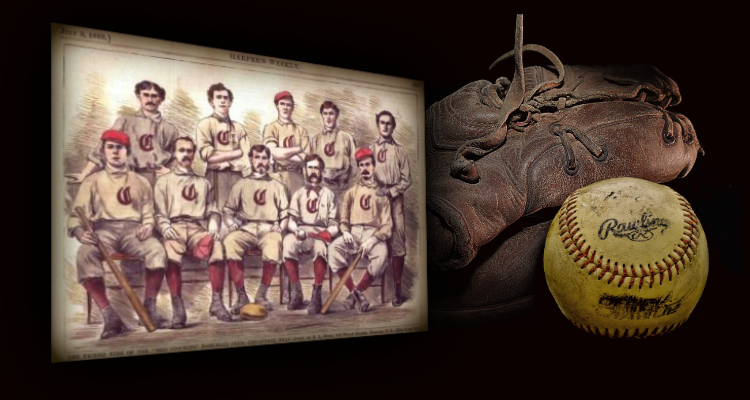 By ROBERT WYSS, University of Connecticut

This Major League Baseball season, fans may notice a patch on the players’ uniforms that reads “MLB 150.”

The logo commemorates the Cincinnati Red Stockings, who, in 1869, became the first professional baseball team – and went on to win an unprecedented 81 straight games.

As the league’s first openly salaried club, the Red Stockings made professionalism – which had been previously frowned upon – acceptable to the American public.

But the winning streak was just as pivotal.

“This did not just make the city famous,” John Thorn, Major League Baseball’s official historian, said in an interview for this article. “It made baseball famous.”

In the years after the Civil War, baseball’s popularity exploded, and thousands of American communities fielded teams. Initially most players were gentry – lawyers, bankers and merchants whose wealth allowed them to train and play as a hobby. The National Association of Base Ball Players banned the practice of paying players.

At the time, the concept of amateurism was especially popular among fans. Inspired by classical ideas of sportsmanship, its proponents argued that playing sport for a reason other than for the love of the game was immoral, even corrupt.

Nonetheless, some of the major clubs in the East and Midwest began disregarding the rule prohibiting professionalism and secretly hired talented young working-class players to get an edge.

After the 1868 season, the national association reversed its position and sanctified the practice of paying players. The move recognized the reality that some players were already getting paid, and that was unlikely to change because professionals clearly helped teams win.

Yet the taint of professionalism restrained virtually every club from paying an entire roster of players.

The Cincinnati Red Stockings, however, became the exception.

In the years after the Civil War, Cincinnati was a young, growing, grimy city.

The city had experienced an influx of German and Irish immigrants who toiled in the multiplying slaughterhouses. The stench of hog flesh wafted through the streets, while the black fumes of steamboats, locomotives and factories lingered over the skyline.

Nonetheless, money was pouring into the coffers of the city’s gentry. And with prosperity, the city sought respectability; it wanted to be as significant as the big cities that ran along the Atlantic seaboard – New York, Philadelphia and Baltimore.

Cincinnati’s main club, the Red Stockings, was run by an ambitious young lawyer named Aaron Champion. Prior to the 1869 season, he budgeted US$10,000 for his payroll and hired Harry Wright to captain and manage the squad. Wright was lauded later in his career as a “baseball Edison” for his ability to find talent. But the best player on the team was his 22-year-old brother, George, who played shortstop. George Wright would end up finishing the 1869 season with a .633 batting average and 49 home runs.

Only one player hailed from Cincinnati; the rest had been recruited from other teams around the nation. Wright had hoped to attract the top player in the country for each position. He didn’t quite get the best of the best, but the team was loaded with stars.

As the season began, the Red Stockings and their new salaries attracted little press attention.

“The benefits of professionalism were not immediately recognized,” Greg Rhodes, a co-author of “Baseball Revolutionaries: How the 1869 Red Stockings Rocked the Country and Made Baseball Famous,” told me. “So the Cincinnati experiment wasn’t seen as all that radical.”

At first only the Cincinnati sports writers had caught on that something special was going on. Then, in June, the team took its first road trip east. Playing in hostile territory against what were considered the best teams in baseball, they were also performing before the most influential sports writers.

The pivotal victory was a tight 4-to-2 win against what had been considered by many the best team in baseball, the powerful New York Mutuals, in a game played with Tammany Hall “boss” William Tweed watching from the stands.

Now the national press was paying attention. The Red Stockings continued to win, and, by the conclusion of the road trip in Washington, they were puffing stogies at the White House with their host, President Ulysses Grant.

The players chugged home in a boozy, satisfied revel and were met by 4,000 joyous fans at Cincinnati’s Union Station.

The Red Stockings had become a sensation. They were profiled in magazines and serenaded in sheet music. Ticket prices doubled to 50 cents. They drew such huge crowds that during a game played outside of Chicago, an overloaded bleacher collapsed.

Most scores were ridiculously lopsided; during the 1869 season the team averaged 42 runs a game. Once they even scored 103. The most controversial contest was in August against the Haymakers of Troy, New York. The game was rife with rumors of $17,000 bets, and bookmakers bribing umpires and players. The game ended suspiciously at 17 to 17, when the Haymakers left the field in the sixth inning, incensed by an umpire’s call. The Red Stockings were declared the winners.

The season climaxed with a road trip west on the new transcontinental railroad, which had just opened in May. The players, armed with rifles, shot out windows at bison, antelope and even prairie dogs and slept in wooden Coleman cars lighted with whale oil. More than 2,000 excited baseball fans greeted the team in San Francisco, where admission to games was one dollar in gold.

Cincinnati ended its season with an undefeated record: 57 wins, 0 losses. The nation’s most prominent sports writer of the day, Henry Chadwick, declared them “champion club of the United States.”

Despite fears that others clubs would outbid Cincinnati for their players, every Red Stockings player demonstrated his loyalty by signing contracts to return for the 1870 season.

The winning streak continued into the next season – up until a June 14, 1870, game against the Brooklyn Atlantics.

After nine innings, the teams were tied at 5. Under the era’s rules, the game could have been declared a draw, leaving the streak intact. Instead Harry Wright opted to continue, and the Red Stockings ended up losing in extra innings after an error by the second baseman, Charlie Sweasy.

The 81-game win streak had ended.

The Red Stockings did not return in 1871. Ticket sales had fallen after their first loss, and other teams began to outbid the Red Stockings for their star players. Ultimately the cost of retaining all of its players was more than the Cincinnati club could afford.

Yet the team had made its mark.

“It made baseball from something of a provincial fare to a national game,” Thorn explained.

A few years later, in 1876, the National League was founded and still exists today. The Cincinnati Reds were a charter member. And not surprisingly, some of the biggest 150-year celebrations of the first professional baseball team are occurring in the town they once called Porkopolis.