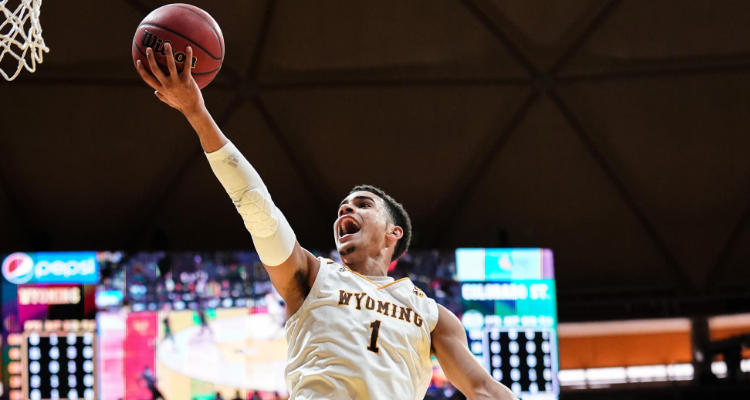 LARAMIE, WY. – Senior Justin James poured in a career-high 36 points in a wire-to-wire 74-66 win for the Cowboys over arch rival Colorado State (9-15, 4-7 MW) on Saturday afternoon in the Arena-Auditorium. The Pokes (6-17, 2-8 MW) opened the game 7-of-7 from behind the three-point line and finished the game with 13 triples for the second most this season.

“The first thing I would like to say is today the added factor was the crowd and the atmosphere,” Wyoming head coach Allen Edwards said. “Our young men obviously were ready to play against CSU, but to have 5,000-plus in the building and especially our student section was great.”

James has now scored 30 or more points five times in his career and two times this season. James was 10-of-14 from the field and 11-of-12 from the free throw line. He was just as lethal from behind the arc hitting a career best five three-pointers on six attempts. James also added seven assists having his hand in 74 percent of the Cowboys scoring. He passed Reggie Slater and Josh Adams for fifth in career scoring at UW with 1,829 points.

“I thought our guys had a determination and a focus from the start of the game,” Edwards said. “Justin James was special. He looked like an NBA player today, with how poised he was and how he was able to orchestrate the game. His decision-making was excellent today. He passed it just as much as he shot it. He rebounded it well, and he gave us just as much with his defensive effort. People will look at the 36 points and say he was great today, but I thought he did so much more. He had a complete game.”

“We came out with the right mentality today,” Edwards said. “We made some shots, but I thought our defense was great. When we can get three stops in a row, we call them kills. In the first half we had five of those, which helped us build the lead. “I told our guys that while we shot the ball well today, I didn’t want them to underestimate how good we were on defense. We did a great job of holding CSU to 66 points, and a few of those points were late threes by them. We held them to 0 for 7 shooting from the three-point line in the first half, and I thought our activity on the defensive end along with rebounding the basketball well were key. Our achilles heel this year has been turning the ball over, but we did a good job today of taking care of the basketball.”

The freshman connection of Trevon “TJ” Taylor, Young and Thompson got the Pokes off to an 8-0 lead a minute into the contest. James was a spark on the defensive end of the floor early with a pair of steals and added three assists.

Young and James would add three more triples to help build a 13-point advantage at 17-4 with 15:06 left in the opening half. James added two of those three pointers. Naughton picked up back-to-back buckets to help move the lead to 15-points at 21-15.

Junior Jake Hendricks would get into the three point shooting streak hitting two more for a 27-13 Wyoming advantage nearly halfway through the first half, as the Pokes opened the game going 7-of-7 from downtown.

Wyoming would build the lead to 16 points with over five minute left in the half, as UW held Colorado State to 32 percent from the field. James moved it to 19 points at 37-18 with an and-one play with four minutes left.

Wyoming would wind up taking a 37-22 lead at halftime shooting 52 percent from field and holding the Rams to 32 percent and 0-7 from the three-point line.

After the Rams hit their first three pointer of the game the Pokes responded with a 5-0 run to make it a 42-25 game with 17:42 left. Young scored a pair of baskets to reach double-figures for the second-straight game.

James passed Cowboy great Reggie Slater with a three-pointer with 15:11 left to make it a 45-28 contest. The Rams responded with an 8-0 run with a pair of triples after a back door cut layup from Nico Carvacho for a 45-36 contest with just under 13 minutes left.

The Rams continued the pressure on a 13-3 run to make it a seven point game at 48-41 with 11:39 left in the contest, but Thompson halted the run with a three pointer to push the lead back to 10 points.

James led Wyoming with an 8-0 run to build the lead back to 17 points at 62-45 with under seven to play. James hit a pair of triples and added a jumper as he passed Josh Adams to move to fifth in career scoring.

The Rams would keep battling thanks to J.D. Paige to put the Rams within eight points with 40 seconds left, but James closed the game with seven free throws in the final two minutes that elevated the Pokes to the win.

Paige finished the game with 22 points to lead CSU. Carvacho added 15 points and 17 rebounds, as the nation leader in rebounds is now one rebound short of becoming the Rams all-time leader.

The Cowboys return to action on Wednesday heading to Logan, Utah to take on the Aggies of Utah State at 7 p.m.