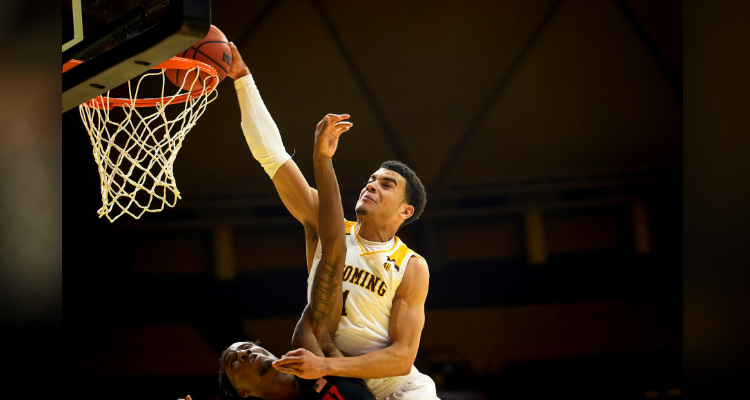 LARAMIE, WY. – Despite another 20 point performance from senior guard Justin James, the Cowboy (6-20 overall, 2-11 MW) offense could not find a consistent rhythm in a 66-56 loss to UNLV (15-11, 9-5 MW) on Tuesday evening in the Arena-Auditorium. James scored 25 points for his 44th 20-point scoring performance in his career.

“I thought we put ourselves in position to win the basketball game but it crumbled at the end,” UW head coach Allen Edwards said. “We turned the ball over 19 times, which is obviously too many. I thought we had a good push in the second half when we had a chance to cut the lead to one with about three and a half minutes to play, but we missed the free throw and then after that they went on a run to stretch out their lead. We did a great job of defending the three-point line, but they were able to drive the ball against us way too much, and we didn’t secure some much needed rebounds.

Wyoming nearly erased a 10-point deficit with under seven minutes remaining coming within two points with 3:34 left. But the Runnin’ Rebels closed the game on an 11-1 run to take their fourth win in the last five games.

“They (UNLV) have a good group of scorers on their team,” UW head coach Allen Edwards said. “We told our guys that we would have to be able to close out and affect their shots tonight but the next biggest thing was to defend the paint. It wasn’t so much about them throwing it into their big guy, it was more about them driving to the paint, and we didn’t do a good job with our secondary defense to step up and take charges.”

James was 7-of-14 on the night from the field and was an impressive 9-of-12 from the free throw line. James had his hand in 81 percent of Wyoming’s scoring on the evening. He added six rebounds and five assists as well. Junior guard A.J. Banks added nine points for his highest scoring margin since adding 10 points at New Mexico on Jan. 19. He also tied a career-high with four assists.

After redshirt freshman Hunter Thompson opened the game with a bucket, the Runnin’ Rebels went on a 10-0 run for a 10-2 lead with 15:40 remaining in the opening 20 minutes. Two of the baskets by UNLV came off of Cowboy turnovers. Junior guard Jake Hendricks would get going for the Pokes with five-straight points to make it a 13-9 game with under 14 minutes left in the half.

After James made it a two-point game at 13-11, the Runnin’ Rebels made a trio of buckets to extend the lead to eight points at 19-11 halfway through the half.

Banks sparked a 10-0 run for the Pokes highlighted by an acrobatic layup, followed by a steal and assist on a James three pointer to make it a one point game at 19-18. Banks would then add a three pointer to give Wyoming a 21-19 advantage with 6:31 left in the opening frame.

The Rebels held the Pokes scoreless for just over four minutes to close the half and took a 30-23 lead at the break. The Rebels shot 48 percent from the field, as the Pokes were held to 32 percent. The Pokes were without James to end the half.

The Pokes would cut it to six points, but a scoring drought by the Cowboys of nearly four minutes let the Runnin’ Rebels move the lead to 10 points at 47-37 halfway through the second stanza. Wyoming would hit back-to-back threes in two trips down the floor and made it a 49-45 game with 7:48 remaining in the contest.

UNLV responded to the Pokes run with a 6-0 run and took the lead back to 10 points with under seven minutes. But James and the Pokes wouldn’t go away going on an 8-0 run to make it a 55-53 game with 3:34 left in the game. James scored six points in the run including his second highlight reel dunk of the game.

UNLV went on a 7-0 after the Pokes surge that gave them a nine point leads with 1:09 remaining and that’s all the Runnin’ Rebels would need on their way to the 66-56 win.

The Runnin’ Rebels were led in scoring by Kris Clyburn with 17 points. Joel Ntambwe added 15 points and six rebounds. Mbacke Diong added a game-high 11 rebounds and eight points going 4-of-4 from the field.

The Cowboys return to action on Saturday heading south to Fort Collins to take on Colorado State in the second edition of the Border War at High Noon inside Moby Arena.