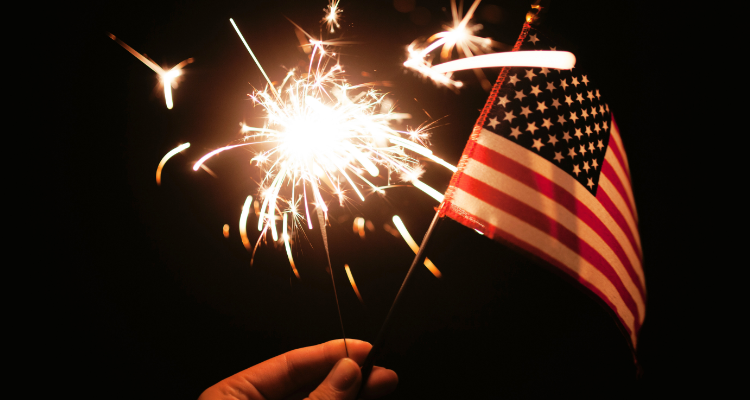 With tomorrow being Independence Day, we wanted to share a few interesting facts and patriotic notes covering the Fourth of July!

We hope there’s something here you didn’t know or didn’t remember. Either way they are a fun way to celebrate the holiday!

July 4th Only Our Given Birthday?
We celebrate American Independence Day on the Fourth of July every year, but did you know that date is only the given birthday of our nation?

It was on July 4, 1776, when the Continental Congress approved the final wording of the Declaration of Independence and agreed upon the document in principle.

July 2, 1776, was the actual date when the Continental Congress declared the American Colonies free from the British Crown and Great Britain.

The Declaration wouldn’t actually be signed by all parties involved until August 2nd, of 1776.

So Who Signed it When?
Only two men actually signed the Declaration of Independence on July 4th 1776 – President of the Continental Congress, John Hancock, and Charles Thompson, the secretary of the Congress.

The other 55 signers, would sign later in the year.

There’s a Woman’s Name on the Document?
A woman’s name appears on the Declaration of Independence, though she’s not an official signer. Mary Katharine Goddard, was commissioned by congress to print copies of the important Document, and added her name below the original signers. Though it’s not clear why she included her name, Goddard was a well-known patriot and one of the first women publishers and postmasters in the country.

The Declaration in the Press
July 18, 1776 twenty-four newspapers had republished the text of the Declaration. The Pennsylvania Evening Post was the first newspaper to include the text in its pages.

John Adams Wasn’t Happy About the Date
John Adams wasn’t happy about the choice of dates and even refused to appear at July 4th events as a matter of principle. On July 3, 1776, John Adams, wrote of his excitement of the congress voting in favor of Independence, in a letter to his wife, Abigail. he wrote,  “The second day of July 1776, will be the most memorable epocha, in the history of America,” firmly believing that July 2nd was the correct day on which Americans should celebrate.

Its first one happened eighty-five years before the Fourth of July was even recognized as a federal holiday, and just two years after the Revolutionary War ended.

When Was it Made Official?
The White House wouldn’t hold its first Fourth of July celebration until either the year 1801 or 1804, there is some debate on the date, but, Thomas Jefferson was the President at the time, and held the first formal celebration.

The 4th of July wouldn’t be declared an official holiday by congress until 1870, almost 100 years after the Declaration of Independence as written. the fourth wouldn’t become a paid federal holiday until 1938.

The Origin of Fireworks and the Fourth
Fireworks play a major role in celebrations of Independence Day in America, and it was no different during the first celebration in 1777. 13 cannons were fired, one round for each state of the union. Many people assume the fireworks correlation comes from these cannons, but event attendees also gathered to watch as the sky was illuminated by actual fireworks. The July 18, 1777 issue of the Virginia Gazette described the celebration in Philadelphia: “the evening was closed with the ringing of bells, and at night there was a grand exhibition of fireworks, which began and concluded with thirteen rockets on the commons, and the city was beautifully illuminated. everything was conducted with the greatest order and decorum, and the face of joy and gladness was universal.”

How Many Fireworks Displays?
it is estimated that around 15,000 professional fireworks displays are put on annually on 4th of July.

A 50-Gun Salute
Every 4th of July at noon, military bases fire a 50-gun salute, to remember each of the 50 states and celebrate their independence. this practice was instituted by the war department in 1810.

The Liberty Bell
The Liberty Bell used to be tapped 13 times on every July 4th to remember and honor the 13 colonies. The bell isn’t rung anymore for fear of further cracking the historic bell. The crack was famously widened in 1846, when it rung in celebration of George Washington’s birthday. It has not been rung since.

Only one U.S. President to date has been born on the 4th of July, and that is Calvin Coolidge, the 30th President of the United States.

Twelve places have “independence” in their name. the most populous of these is Independence, Missouri with 109,400 residents.

The National Bird
Benjamin Franklin proposed the turkey as the national bird, but he was overruled by John Adams and Thomas Jefferson, who recommended the bald eagle to be the American national bird.

The Flag
The design of the American Flag has changed 27 times over the course of the nation’s history.

Food on the Fourth
Barbecue / grilling: The tradition of grilling on Independence Day was inspired by Virginia colonists barbecuing over open pits. The practice also spread to political rallies held on Independence Day.  The barbecues were held to draw in crowds.

Beef & Pork: Today, some 190 million pounds of beef and pork are also sold in the weeks prior to the holiday.

Hot Dogs: Somewhere in the range of 155 million hot dogs are eaten in the United States on the 4th of July, the biggest hot dog holiday each year, according to the national hot dog and sausage council. For reference that many hotdogs could stretch from Washington D.C. to Los Angeles five times over.

Fruit: Watermelon is the most popular fruit consumed on the Fourth of July.

Traditionally, Some Like Salmon
While people associate hot dogs with celebrating the fourth, eating salmon is actually a tradition in New England on the Fourth of July. The tradition is more of a coincidence, as salmon is abundant during the middle of the summer in the rivers of the region. The salmon is traditionally served paired with green peas, and historically turtle soup.