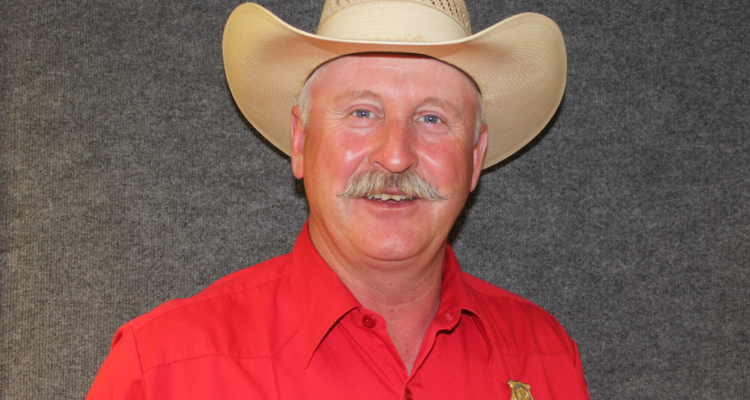 MOORCROFT, Wyo. | WGFD – After a 31-year career with the state of Wyoming, 24 of which were spent serving the Moorcroft community, game warden John Davis has retired.

Davis grew up in the Moorcroft area and then attended Sheridan College and the University of Wyoming. During the summer of his senior year at UW, he took a job on the Wyoming Game and Fish reservoir crew, a work unit dedicated to patrols on Wyoming’s waters.

“I’d gone to college with Scott Talbott (who later became a game warden and eventually director of the Game and Fish Department),” said Davis. “We were pretty good buddies and that summer before I graduated, Scott and I were talking and I told him I wasn’t sure what I was going to do after graduation. He asked me what I thought about doing law enforcement and told me about the reservoir crew. I thought it sounded like a pretty good deal and I would give it a try. So ultimately Scott is responsible for the whole deal.”

He was then hired as a game warden trainee in Laramie and attended the Wyoming Law Enforcement Academy in January 1991. He was assigned his first warden district in Kaycee where he served for five years before applying for and receiving the Moorcroft game warden position upon the retirement of Sid Clark in 1995.

“I think it gave me at least a two year advantage by moving into a warden district where I knew the roads, I knew a lot of the people and I guess more importantly, people knew me,” he said, about the decision to pursue a law enforcement career in his hometown. “I thought at first it might be kind of awkward but nobody has ever put me in a position to have to choose between a friendship and my job.”

“Actually the first fall I was in Moorcroft I got a tip from an acquaintance that led to the Sagebrush Outfitter case, which at the time was the biggest poaching case in the state,” he said. “That was just from people already knowing me when I got here. That case was certainly a learning curve because at the time our license system was not computerized so it led to some long days in the Cheyenne headquarters basement, hand-searching paper licenses. It was pretty tedious stuff!”

In addition to law enforcement, Davis said his warden career offered him unique opportunities to work hands-on with wildlife.

“It is something that the public really doesn’t have a chance to do, handle wildlife, and back in the day I was actually part of the net-gunning crew on a helicopter,” he said. “We collared some elk on the south Bighorns and I was one of the three guys in the helicopter, bailing out, tying these elk down and putting on collars. I’ve flown as a spotter for the pilot when we captured antelope at the time when we required a Game and Fish employee in the helicopter to look for power lines and such while the pilot was flying. That’s been fun.”

Davis was also a longtime hunter safety and canoe and water safety instructor for youth in the Moorcroft area. For more than 20 years, students from Rozet, Hulett and Moorcroft learned from Davis how to properly fit and wear a lifejacket, how to safely handle firearms, how to stay safe while boating or canoeing and many more outdoor skills.

“Looking back on it all, I think the public as a whole still has respect for game wardens, which has probably saved some game warden lives,” said Davis. “Just the nature of our job can be dangerous, working in remote areas and people don’t know always where you are at. But people still seem to respect game wardens. I think because more often than not, game wardens help people rather than punish them. We’ll tell folks if the fish are biting and on what, where the best hunting is, where to go, where to look and that sort of thing. We are a resource for the public.”

Davis’ last day as a game warden was April 2, 2020. Game Warden Jacob Miller has been temporarily assigned to the Moorcroft warden district.