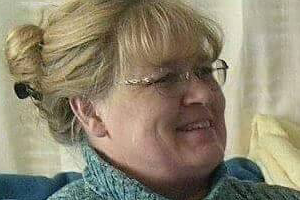 A tiny flower, lent, not given. To bud on earth and bloom in heaven.
Mary Marguerite (Bock) Robertson, our beloved wife, mom, grandma, daughter, and sister, died in a tragic car accident on Sept. 19th near Cozad, NE. Our hearts are broken at the loss of one of the most generous, loving, and devoted ladies that many have known. Mary touched the lives of so many.
Mary was born July 7th, 1957 in Newcastle, WY. She was raised near Osage WY, attended grade school in Osage, graduated from St. Martin’s Academy in 1975, and attended Carrol College in Helena, MT. She married Monte Robertson, the love of her life, April 1, 1976 at Dupree, SD. Mary and Monte were blessed with three beautiful children, Friend Royal, Tanya Patrice, and True Joseph. The family lived and worked on ranches in South Dakota and Nebraska. In 1979, they moved to Newcastle, WY where they worked on the Townsend ranch for 10 years before moving to Osage, WY. Mary began working at the Newcastle Police Department as a dispatcher, eventually working her way up to head dispatcher. In 2010 she was named the APCO Public Safety Wyoming Chapter Communications Supervisor of the year. Mary worked for the PD for over 25 years. Mary loved the people with whom she worked and considered them family. After retiring she and Monte moved to Cozad to be closer to their children and grandchildren.
Mary loved to crochet and knit, gifting numerous baby blankets, afghans, hats, mittens, and anything anyone would mention a need for. Mary loved working with her husband Monte, especially when they had the opportunity to ride the pastures where she saw wildlife, butterflies, and flowers. She adored her children and grandchildren and would do anything in the world for them. You could not have a conversation with Mary without hearing about the latest grandbaby adventure. Mary enjoyed canning and quilting, was artistic, and gave the best advice about gardening. Her smile and hugs were enormous, just like her heart.
Mary is survived by her husband Monte, (aka the Old Fart) of Cozad, NE, her daughter Tanya (Sam) Stevenson of Earth, TX, son True (Kim) Robertson of Cozad, NE, her beloved grandchildren Clayton, Emma, and Jenna Beth of Earth, TX and TJ, Haley, and Reinie of Cozad, NE. She is also survived by her mother Patricia Bock of Newcastle, sisters Theresa Larrabee, Dolores “Del” Bock, Elizabeth Townsend (Sergio Mireles), Virginia (Alan) Hale, brothers Lawrence “Buck” (Gayla) Bock, Michael (Cathy) Bock, Paul (Eric Klis) Bock, her brother-in-law and sister-in-law, Craig and Robin Robertson, many nieces and nephews, and a large extended family. Mary is also survived by her best friend Patty McCoy, and her two beloved aunts, Laura Bock and Bubbles Brown.
Mary was preceded in death by her son Friend Royal, her brother Joseph Royal, her father Royal, and her father-in-law and mother-in-law Keith and Lyla Robertson.
Funeral services will be Tuesday, Sept. 27th 10:00 a.m. at United Church of Christ in Hermosa, SD. Burial will follow at the Hermosa cemetery.
Memorial funds have been established at Security First Bank, PO Box 10, Cozad, NE 69130 and First State Bank, PO Box 910, Newcastle, WY 82701.
There will be a memorial service held in Cozad, NE at a later date.
“There are times when there are too few words left to heal us, when what we wish for is to be carried, when all we have left is the hope that tomorrow will be a more gentle place to land than today.”