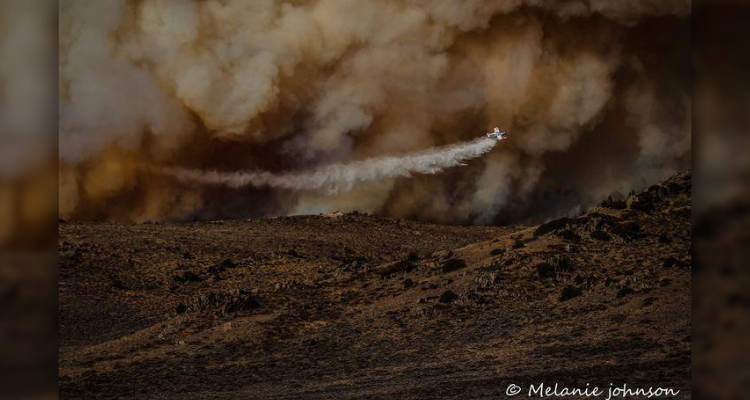 CHEYENNE, WYO. (AP) — The Mullen Fire has destroyed 29 homes and 31 other structures in southeastern Wyoming and threatens to remain active for weeks to come, officials said.

The fire in Medicine Bow National Forest about 100 miles west of Cheyenne has slowed somewhat since more than doubling in size over the weekend but firefighters expected it to keep spreading through dense, beetle-killed pine.

More dry and breezy weather will keep the more than 96,000 acre fire active on several fronts, firefighters and other officials said at an online community meeting Tuesday evening. No rain or snow was in the forecast.

“We’re in this thing for the long haul,” Forest Supervisor Russ Bacon said.

The fire grew by about 20 square miles from Tuesday to Wednesday and kept large areas of northern Colorado shrouded in smoke.

The forest contains several small communities of recreational cabins. For days the fire was too intense for Albany County sheriff’s officials to get in to assess damage but they were finally able to do so Tuesday.

They discovered cabins and other buildings burned in the Lower Keystone, Lake Creek and Foxborough developments. It was still too risky for homeowners to return, Undersheriff Josh DeBree said.

Mandatory evacuation orders were in place for those burned communities and several others including Albany and Woods Landing. Wyoming Highway 230, which connects Laramie with Colorado communities including Steamboat Springs, was closed.

Some 900 people were fighting the fire and over a dozen planes and helicopters were scooping water from Rob Roy Reservoir and other lakes to dump on the flames.

The fire began Sept. 17 in the Savage Run Wilderness and has burned most of that wilderness and part of the North Platte Wilderness. The cause was under investigation.