Music and Memory Brings Familiar Back to Dementia Patients 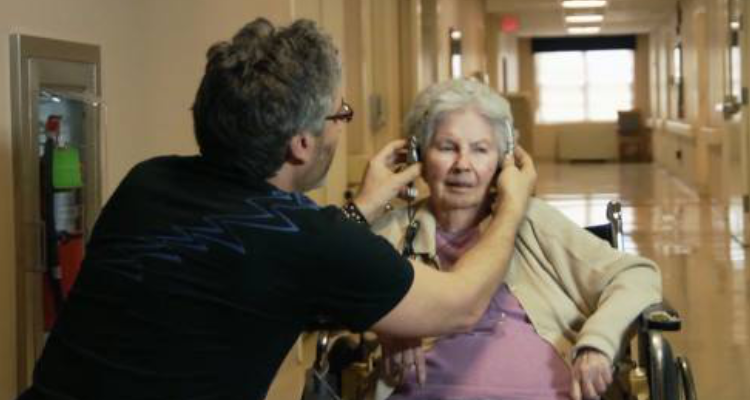 Music and Memory Brings Familiar Back to Dementia Patients

RAPID CITY, SD. | By TANYA MANUS, Rapid City Journal (AP) — Monty Stensland recalls his first date with his wife, Betty. She taught him a song, “The Bear Went Over the Mountain.” After 68 years of marriage and Betty’s battle with dementia, that song remains a happy memory the couple can share.

Music is helping improve the quality of life for Betty Stensland and other residents at Avantara Saint Cloud’s Alzheimer’s facility in Rapid City. It is one of several nursing centers in South Dakota using the Music and Memory program to calm, comfort and improve communication skills for Alzheimer’s and dementia patients, the Rapid City Journal reported.

A year ago, former administrator Laura Karlson launched the program at Avantara Saint Cloud. It partnered with the South Dakota Foundation for Medical Care to set it up, train staff and get the necessary equipment.

After becoming certified, Alzheimer’s Care Director Shauna Gunnels and other staff members started formulating playlists for residents. If family members know the songs, singers or musicians a resident likes, Gunnels puts those in a playlist. Otherwise, Gunnels compiles about an hour’s worth of music that was popular when residents were younger.

The Music and Memory program is used by about half the residents, she said.

“A vast majority of what they retain is from their early 20s and 30s. That seems to resonate the most,” Gunnels said.

The facility stores playlists on MP3 players or iPods. Earphones and players are often kept in a resident’s room so staff or family members can easily access the music. Gunnels sometimes takes walks in the halls with residents, listening to their music with them and adjusting playlists if a resident’s facial expressions show the songs aren’t to their liking.

Betty Stensland’s playlist includes piano music and Glenn Miller tunes. She likes it so well that she sometimes asks for “her ears,” Gunnels said.

Monty Stensland visits his wife daily and says the music helps her relax when she’s feeling restless or having trouble sleeping.

“It has really made a difference with her. She can be crabby and you ask if she wants music in her ears and she says, ‘oh yes,'” Monty said. “Sometimes her communication is just mumbling, but after she’s rested, she can talk.”

Gunnels has been the Alzheimer’s Care director since February, and she readily admits to crying tears of joy sometimes when she sees the way music changes residents’ lives.

Sharie Wolff, for instance, tended to have anxiety and a lot of crying spells. Mealtimes were difficult.

“We tried changing dining rooms, we tried about everything and she just couldn’t stay there and stay focused. She would leave the dining room,” Gunnels said. “We started putting Elvis music on her (MP3) and gave her finger foods so she could eat while she walked.”

Listening to Elvis music for a few minutes before meals relaxes Sharie enough that she’s now able to sit in the dining room and has fewer crying spells.

Music is effective therapy, Gunnels said, because Alzheimer’s seems not to affect areas of the brain related to music.

“All those synapses get rearranged and for whatever reason the part of the brain that still recognizes and understands music is not disrupted during this disease, which is strange,” she said. “Residents can’t remember their spouse or children, but they can remember a song from 60 years ago.”

According to researchers at the University of Utah, Alzheimer’s disease impairs the salience network of the brain, which serves as a communications hub between its various regions. The resulting lapses in memory force patients to live in a chronically unfamiliar world and therefore, in a frequent state of anxiety.

The Utah team studied MRIs of patients listening to familiar music and researchers saw significant re-activation of the salience network. Language and visual memory pathways were partially restored, and the ability to process rewards, motivations and respond positively to their environment improved.

Gunnels said compiling a playlist is a smart addition to end-of-life planning. Along with a will, long-term care insurance and estate planning, individuals should add a list of their favorite songs or create playlists of music to use in case dementia care is needed someday.

Karlson said she believes the Music and Memory program contributed to Avantara Saint Cloud being named a national quality award recipient for 2019 by the American Health Care Association.

“We’re proud of this prestigious designation, but even more so of the care we provide each day for our residents,” Karlson said. “Over half the nursing centers in South Dakota have become certified in Music and Memory, with more being added to the list. In my time in long-term care, this is one of the most inspiring programs I’ve seen.”
___
Information from: Rapid City Journal, http://www.rapidcityjournal.com