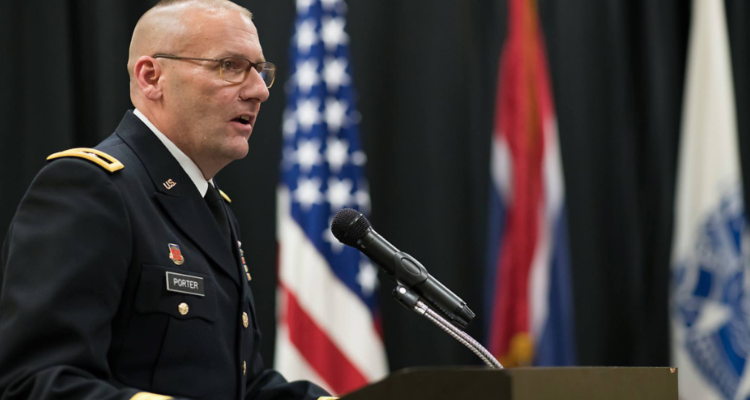 CHEYENNE, WY. – The Cowboy State anointed its new National Guard top commander on Thursday, March 28. The appointment comes at a time when the organization has seen an uptick in deployments since the beginning of the wars in Iraq and Afghanistan nearly 20 years ago, while continuing to meet domestic demands.

Maj. Gen. Gregory C. Porter succeeded Maj. Gen. K. Luke Reiner as adjutant general during the Wyoming National Guard’s change of command ceremony at the Red Lion Inn Hotel, in Cheyenne. This year, the state will deploy several units this spring and summer, including its largest the 2/300th Field Artillery Brigade with more than 200 soldiers in July. Other elements include a fixed wing detachment and infantry.

Reiner retired after 36 years of military service, and said of his tenure: “This has been an amazing eight years marked by growth and change, I am proud to have served as Wyoming’s adjutant general. I am confident the Wyoming Military Department will continue to make great strides under General Porter’s leadership.” Reiner served as Wyoming’s adjutant general since April 1, 2011, and was picked last month by Gov. Mark Gordon to head the state’s Department of Transportation as its director.

Porter became the 27th adjutant general for the state during the transfer of authority, and most recently served as the director of the joint staff at the Joint Force Headquarters.

Porter has lived in Wyoming since he was 9 and joined the armed forces in 1985 through the University of Wyoming’s Cowboy Battalion Army Reserve Officers Training Corps.

Porter will assume responsibility of more than 3,000 Army and Air National Guard members. He will oversee day-to-day operations of several departments, which includes more than 40 units.

Gordon presided over the event, which came between ceremonies for Porter’s promotion to major general and Reiner’s retirement. The 28th Chief of the National Guard Bureau Gen. Joseph Lengyel also spoke as a guest of honor. Gordon said to Porter, “There were a number of dignified, properly trained and talented individuals who were stepping forward to assume this position, and that you were by far the quality of that group, that says a lot because that was an amazing group.”

Lengyel addressed the new commander, saying “Congratulations to team Porter. You’re in good hands, you have big shoes to fill. I want to thank (Maj. Gen. Porter) for the work he’s already done.” He added, that being a TAG is “like a box of chocolates, you never know what you’re going to get,” then wished Porter, “a long and boring tenure.”

After Porter raised his right hand to take the oath of his new office, he shared four primary strategic imperatives for the Wyoming Military Department. “I have a vision for the Wyoming Military Department and it is this,” Porter said. “We are the sword and shield for our state and nation. As the sword we are lethal and professional, as the shield we are responsive and add value to our communities. I believe with the great men and women of our department, we will ensure the safety of our residents and sustain the freedoms our forefathers and those who have protected this country before us fought so hard to earn.”