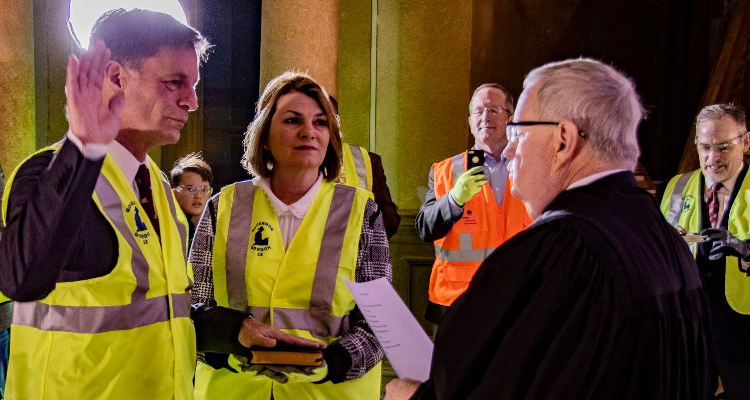 CHEYENNE, WY. | By MEAD GRUVER, (AP) — Mark Gordon wore a yellow safety vest for his swearing-in Monday as Wyoming’s 33rd governor, which took place in a well-known yet unusual setting: The Wyoming State Capitol, which has been closed for major renovations for over three years.

Because of safety restrictions, only a small crowd of a few dozen relatives, state officials, construction personnel and an Associated Press pool reporter witnessed the 6 a.m. ceremony under the glare of construction lights.

“It’s the people’s house. I wanted to make sure we started with them,” the Republican Gordon said after being sworn in by Wyoming Chief Justice Michael Davis beneath a giant U.S. flag hanging from scaffolding a couple stories high in the building’s rotunda.

A public swearing-in ceremony for Gordon was planned later Monday morning at the Cheyenne Civic Center, where recent governors including Republican Matt Mead and Democrat Dave Freudenthal took their oaths of office.

The closed-to-the-public event at the Capitol, organized by Gordon and his staff over the weekend and announced Sunday, pre-empted the public ceremony by four hours.

“What an honor to be in this room. What an amazing moment,” Gordon said after taking the oath of office with his wife, Jennie, at his side.

Gordon, 61, beat Democrat Mary Throne in November’s election to succeed Mead, who after two terms was prevented from running again. Gordon was state treasurer for six years before beating five opponents to claim the Republican GOP nomination and face Throne, an energy industry attorney and state lawmaker from Cheyenne.

Gordon ranches in the Buffalo, Wyoming, area and is a former businessman and board member of the Federal Reserve Bank of Kansas City.

The over $300 million project to renovate the Capitol and a neighboring state office complex, the Herschler Building, is scheduled for completion this year. As of Monday, a fair amount of work appeared left to do, from unfinished flooring and paint to protruding electrical wires.

Before the event, participants and spectators including Senate President Drew Perkins and House Speaker Steve Harshman rendezvoused in a construction trailer to collect hard hats, safety vests and safety glasses, and hear a safety briefing.

All including Gordon signed liability waivers.

Most then boarded an antique-trolley-style tourist bus for the one-block drive to the Capitol. Workers with flashlights lit the way up temporary wooden steps to the main entrance, the still-shrouded Capitol dome looming overhead in the breezy dark.

The ceremony concluded within half an hour.