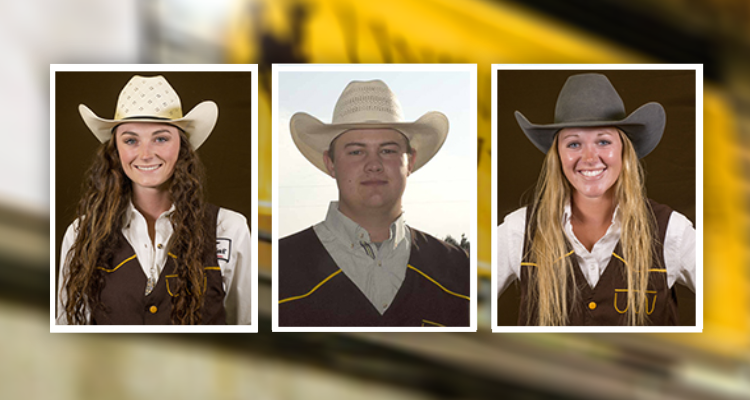 Both the UW Cowgirls and Cowboys teams are coming off Central Rocky Mountain Region (CRMR) championships, a feat that had not been accomplished in the same season in 13 years.

Even though Jacey Thompson and Taylour Latham did not pick up individual event wins, their 248.3 points helped the Cowgirls accumulate a total of 323.33 points to edge runner-up Casper College, which tallied 308.3 points. Gillette College placed third in the three-day rodeo with 265 points.

Meanwhile, on the men’s side, the Cowboys received production from five of their six points team members to complete a third-place finish. Casper College took the first of five fall rodeos with 600 team points. The host Eagles were the weekend’s runners-up with 535 points, while the Pokes tallied 470.

The total points are unofficial until certified by the national office this week.

Thompson, from Yoder, picked up where she left off last season competing as an all-around performer for Eastern Wyoming College (EWC). The junior placed in two separate women’s events, splitting the breakaway roping short go to place third in the average. She also added points by placing second in goat tying’s opening round.

She was second in the CRMR all-around last season.

Latham, from Roosevelt, Utah, a member of perennial regional power Gillette College last season, had the second-best time in the barrel racing short go to wind up with second place in the average.

The final 75 points came from defending all-around regional champion Teisha Coffield, a senior from Yuma, Colo. She placed in both rounds of goat tying, an event where she placed among the top 10 at last season’s national finals. She placed fourth in the average at Chadron State.

Her brother, Chadron Coffield, an EWC transfer, paced the men’s team in his first appearance in the rodeo arena representing the Cowboys. The junior finished among the top six in a pair of separate events, placing in both rounds of tie down roping and steer wrestling. He was third in the bulldogging competition and roped his way to fourth in the calf roping average.

The Pokes had one individual event champion on the points team. Last season’s College National Finals Rodeo Rookie of the Year, Caden Camp, had the steer wrestling competition’s third-quickest time. The Belgrade, Mont., sophomore turned around to post the top time in the short go to take the overall average.

Both he and Coffield accounted for 340 of the Pokes’ total team points.

Freshman Houston Brown, from Broadus, Mont., and Jase Staudt, of Nathrop, Colo., added 20 team points each in tie down roping.

“It was a good weekend for UW rodeo. We had someone come back to the short round in every event,” UW Coach Beau Clark says.

He says the team’s freshman class did a “great job” competing at the collegiate level, and the transfer students also produced for the UW rodeo program.

“Our returning students continued to compete at a high level for UW. The highlight of the weekend came from Kelsey Lensegrav, Jacey Thompson, Chadron Coffield, Cash Wilson and Caden Camp,” Clark adds.

Both the Cowgirls and Cowboys had individual place winners who were not included in the opening weekend’s points teams.

For the Cowgirls, Lensegrav, from Interior, S.D., placed fourth in both goat tying and breakaway roping; and Shayla Howell, from Colony, and partner Cord Roberts, of Laramie County Community College, were sixth in the team roping average.