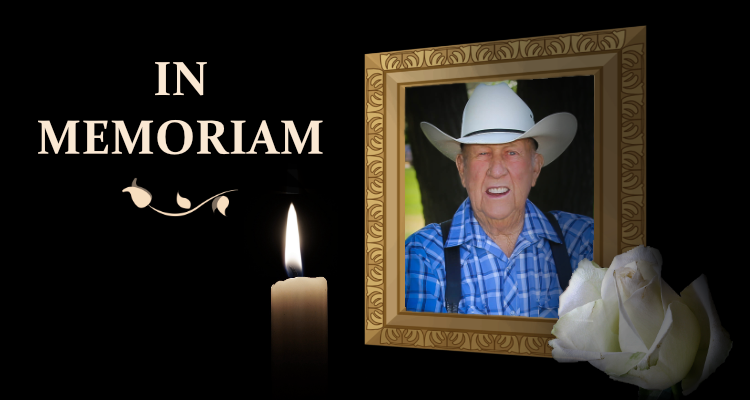 Services for Dwight D. Elliott of Newcastle will be held January 6, 2020 at 2 p.m. at the Weston County Senior Center in Newcastle, WY.

Dwight Elliott of Newcastle, WY passed away December 29, 2019 after a prolonged battle with cancer.

He attended the Lonetree, Clareton, Fairview and Simmons country schools in his elementary years before attending Newcastle High School. He graduated NHS in 1955 and married his high school sweetheart, Gertrude Helen Bond, on October 16, 1955. They made their home on Hay Creek on the home ranch. To this union, three sons were born: Dwight Lee, Kent Dean and Clay Travis.

Dwight first worked for his father on the family ranch and in the oil field as a rig hand until he started pumping oil wells for Tenneco. He later spent his work life ranching on Hay Creek and in various positions in the oil field.

Dwight served in the National Guard from 1954-1963. He was a member of the Methodist Church and was a Master Mason. Dwight served on the Weston County Fair Board for over 20 years. He was appointed President of the board for several of those years. One of his proudest moments was working to get the barns and facilities built that are used at the fairgrounds today. In addition to this, he was a 4-H leader and held both the Wyoming State FFA degree and an Honorary FFA Degree with the Saddle and Sirloin FFA. He also served on the FOCUS board for 5 years. Additionally, he was a member of the NRA and the Rocky Mountain Elk Foundation.

After the passing of Gert, Dwight kindled a relationship with long-time friend, Janet Wocicki. She joined him on Hay Creek where they spent the next 17 years traveling and enjoying their grandchildren and great grandchildren both here in Wyoming and in Oklahoma.

Affectionately known as Papa, his children, grandchildren and great-grandchildren were one of his most treasured assets. To all who knew him, Dwight was always ready for a cold beer and a long conversation. This would usually include a lot of laughs and good-natured teasing regardless of whom he was visiting with. He was often heard saying, “I only get to go around this life one time, and I will have a laugh a day, either at your expense or mine.” This was one of the things he enjoyed the most.

He thoroughly enjoyed elk hunting as well. For many years, he traveled with friends to other parts of the state to find a good one.

Dwight was an avid Wyoming Cowboys fan and rarely missed a game either listening to it on the radio or watching it on tv. He even attended numerous UW football games with granddaughter, Brynn.

In lieu of flowers, donations can be made to the Dwight Elliott Memorial to be used for improvements and junior programs at the Weston County Fair. Memorials and condolences may be sent in care of Meridian Mortuary 111 South Railroad Ave, Newcastle, WY 82701. Condolences may also be expressed at www.meridianmortuary.com