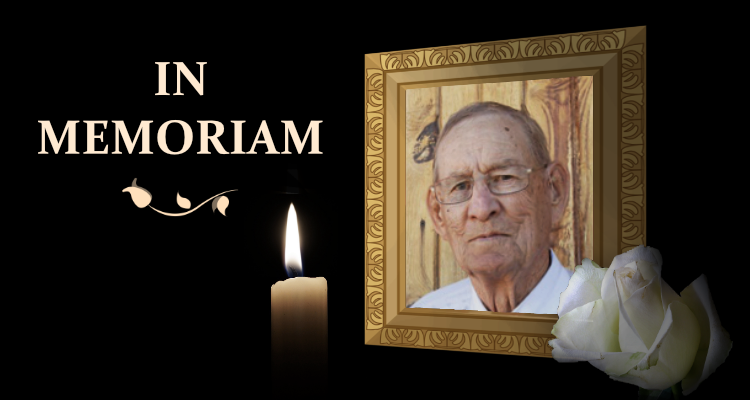 NEWCASTLE, WY.  –  Ervin Robert Allen passed away on February 20, 2019 at the Weston County Hospital from health complications after sustaining a broken hip during a fall at home. Ervin was the fourth of five children born to Ross Winfield and Anna “Lorella” Allen on March 6, 1924 in Newcastle, WY. Grandparents were William Winfield and Eva (Fairbanks) Allen, Ursula and Ignac or Ignatz Kovak, of Austria, (known as Mr. E.V. Smith in the USA). Ervin grew up on the family’s ranch about 23 miles north of Newcastle in an area known as the Canyon Springs Prairie (near Mallo Camp). Siblings included his brother, Ross “Junior” Allen, and sisters, Ariel Cole, Anna Marie Rawhauser, and Lorna Hansen.

Ervin attended North Timber School, then later Boyd School and Newcastle High School. After a couple of years of high school, he quit to help his father with the ranch and tend their sheep. His favorite pastimes included fishing, hunting and roaming his beloved Black Hills on either his favorite horse, 4-wheeler or snowmobile. He was an unbelievably smart and talented man with an uncanny ability to build or fix just about anything. When duty called during WWII, Ervin joined the Army in March 1945 and became a corporal where he ultimately served as a Military Policeman in Tokyo, Japan. He received his honorable discharge in December 1946 when he then returned to ranching.

Ervin met the love of his life, Rose Astrid Hansen at a dance and they often met to roller skate at a local rink. They were married on October 21, 1947 at the First United Methodist Church where they have both been members since a young age. The love between these two people has endured for more than 71 years and been an inspiration to all of their family. Although times were lean, there were many happy memories made camping and traveling all over the western United States, Canada and Alaska. There’s hardly a place they have not explored.

In 1950, Ervin was offered a job at the Sioux Oil Company refinery in Newcastle, where he had a long and successful career of 36 years, ultimately becoming their head welder and go-to-man for just about anything that needed repaired. He also served as Treasurer of the local Worker’s Union. Although he suffered several serious injuries while working at the refinery, he always maintained a gung ho attitude for the work that needed to get done. To this day there remain numerous current and former co-workers that remember the great times working with Ervin at the refinery. Ervin and Rose made their home in Newcastle during his years working at the refinery, and then moved to their homestead near Four Corners after retirement.

A memorial service will be held Saturday, February 23, 2019, at the First United Methodist Church in Newcastle at 10:00 am. Cremation has taken place and burial of the cremains will be at the Boyd Cemetery at a later date. In lieu of flowers, the family requests memorials be made in Ervin’s name to either the Weston County Senior Center, 627 Pine St., Newcastle, WY 82701 or the First United Methodist Church, 23 N. Seneca Ave., Newcastle, WY 82701.