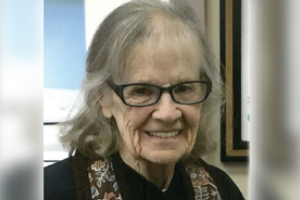 Leona was born on Sept 9, 1937 to Lyle Beryl Loveland and Eileen Elizabeth Loveland in Ft Collings, CO. She was the oldest of four children, followed by her brother Lyle, sister Mary Anna, and brother Danny. From the time of birth to her death, Leona had a deep love for Jesus. Faith and her family were her focus and that never wavered. She enjoyed music, especially hymns, and sharing her favorite snacks of chocolate and Lay’s potato chips with the ones she loved.

She married the love of her life, Leslie Wayne Jones on November 21, 1954. They were married 58 years before Wayne’s passing.

Funeral services will be at 2:00 PM on Thursday, April 26, 2018 at the 1st Baptist Church in Upton WY. Burial will follow at Greenwood Cemetery in Upton. A time of food and fellowship will follow at the Upton Community Center. Arrangements are under the care of Fidler-Roberts & Isburg Funeral Chapel of Sundance. Online condolences may be written at www.fidler-isburgfuneralchapels.com