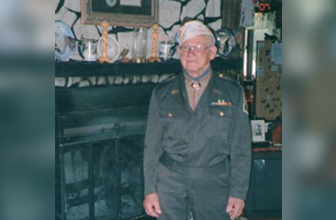 Franklin E. Humes peacefully passed away on July 7, 2017 at the Weston County Manor comfort care unit in Newcastle, WY. He was surrounded that day by family, friends and a remarkable staff that gave him physical, spiritual and emotional support.

Franklin (also known as Frankie, Friendly Frank or Frank) was born in Newcastle, WY on January 17, 1926 to Franklin A. Humes and Lillian Hutt Humes. Shortly after his birth the family moved to Nebraska where he spent the next eighteen years.

In 1944, Frank graduated from high school in Broken Bow, Nebraska and was inducted into the U.S. Navy the next day. He spent a short time in boot camp and then was sent to the south pacific for the final days of WWII.

In 1946, Frank returned from the war and went to Newcastle, WY to visit relatives and decided to never leave. He married Donna Burns on June 15, 1949. They were blessed with two children, Susan and Franklin E. Humes, Jr. (Ed).

The next 68 years are filled with many stories of life in general. To tell all of these would take volumes. He was a businessman, fireman, community leader, church leader and in general a pillar of the community. He always believed in making his corner of this world a better place.

Frank was preceded in death by his wife, Donna and one grandson Adam Bowman. He was also preceded by his parents and siblings; Raymond Humes (18 months, Robert Humes, Ralph Humes, Ruby Zimmerman, Ruth Floretta, Louise Woodward and Richard (Willie) Wilson.

Funeral services for Frank will be held at 2:00 PM Thursday, July 13th at First United Methodist Church with Rev. Michael Jarrell officiating. Burial will follow at Greenwood Cemetery in Newcastle under direction of Worden Funeral Directors of Newcastle. Veterans rights will be given by Veterans of Foreign Wars Chapter # 2516 of Newcastle.

In lieu of flowers, memorial contributions would be appreciated for the Newcastle Lions Club, the United Methodist Mens Group, the Adam Bowman Memorial Foundation or any organization of you choice.

To all of us who knew and loved him, he will be missed.