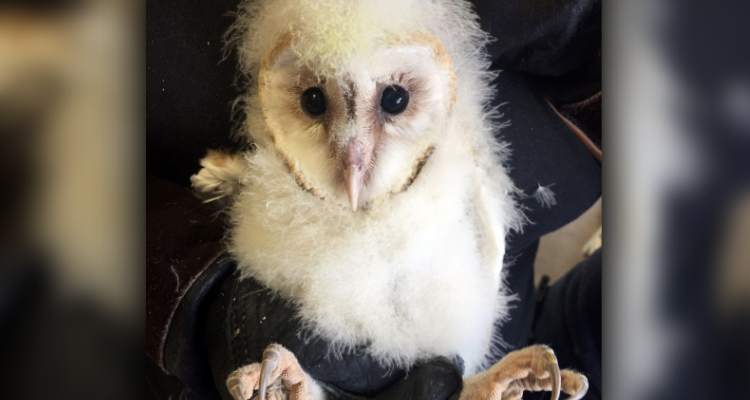 Jackson, WY. – Back in late March, the Teton Raptor Center received a call from Idaho Fish and Game regarding three displaced baby barn owls, within 24 hours the organization had admitted a record number of 19 Barn Owl nestlings. By early April the owls were being rehabilitated and the mission was on to find suitable nests, to get the them back out in the wild.

Normally, the organization tries to minimize the number of orphans it admits because young birds are best left near their parents. Nest boxes are usually created in the same area where a nest may have been disturbed allowing for the bird to ‘return home’ keeping the family unit intact. When birds cannot be reunited with parents, the Teton Raptor Center considers wild-fostering, the process where baby owls and other raptors are placed into “adoptive nests”, to be raised by new parents, as the best option for re-introduction.

“Young raptors do best when raised by wild parents. The best case scenario is that we can place these 19 babies into 8-9 active barn owl nests. That way, the wild parents aren’t overwhelmed, but the youngsters get a wild upbringing,” said Meghan Warren, Rehabilitation Director at Teton Raptor Center.

Unfortunately, for two of the three clutches of owlets that were admitted, the locations of their nests were unknown, so there was no way of reuniting the young with their parents.

The Teton Raptor Center worked with Darin Day, a local owl enthusiast and nest box builder who offered to help re-nest the owls in Northern Utah. Homes for 8 of the 19 babies were found. By Earth Day, April 22nd, the last of the 19 nestlings were returned to the wild in active nests.

Darin, along with the Utah Division of Wildlife Resources, Idaho Fish and Game Upper Snake, and Wyoming Game and Fish Department played a huge part in helping make the transfer of these owls back into the wild possible.

Barn Owls are a Protected species under the Migratory Bird Treaty Act. They are found across most of the lower 48 states and around the world. Because of the elusive nature of Barn Owls, most people may not even know that they have nests on their property.

What should you do if you find a baby bird:

– Without disturbing the nest, please notify Teton Raptor Center of any active raptor nests to help create an inventory of possible foster nests for future displaced Barn Owls or other raptor species.

– Don’t use rodenticides. The best way to manage rodent populations is through healthy raptor populations. Rodenticides can be lethal to birds, dogs, cats, and other wild creatures.