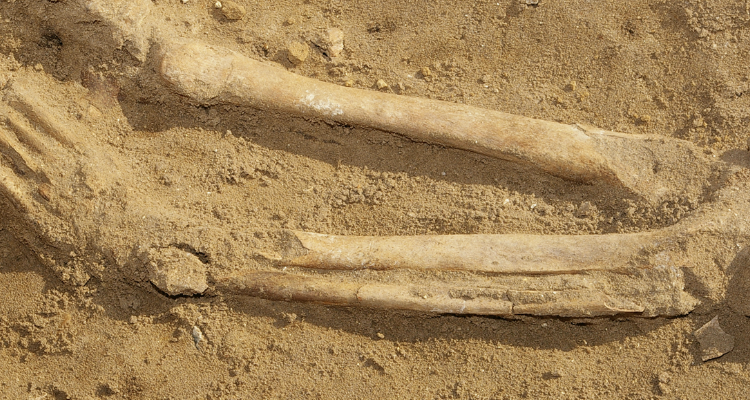 CASPER, WY. (AP) — Originally, Sen. Brian Boner wanted to deal with the issue of federal rules on private land, but a bill he’ll propose in the upcoming legislative session deals with an older problem: what to do with Native American remains found in Wyoming.

As drilling interest has risen in the Powder River Basin with the price of crude, conflict has sparked regarding how the Bureau of Land Management carried out its environmental and cultural rules. The basin is a confluence of Native American history, with more than a dozen tribes’ footprints left behind in graves and rock formations on the landscape — a largely privately-owned landscape.

But when a well is drilled on private land these days, it’s highly likely that that well will be a horizontal well. It will dive down into the rock then turn and traverse on a lateral of up to two miles. If somewhere along that length the well intersects with federally-owned minerals, the Bureau of Land Management must take a survey at the surface.

The process isn’t nearly as involved as it would be if the well were proposed from a starting point on federal land, but when there are Native American sites near the proposed well, the federal agency is required to alert more than a dozen tribes and offer them a chance to view the site. Anything that could degrade the view of and around the site, from roads to wells, was considered a negative impact.

That conflict hasn’t found a full resolution. State lawmakers consulted on the issue couldn’t do much, but they did approach BLM leadership and Wyoming delegates who promised better application of the law.

Those early debates also sparked a conversation on burial sites, remains and funerary objects. Wyoming is one of the few states in the country that lacks a protocol when remains and associated objects are found. The state currently has no penalty for not alerting authorities or for keeping those artifacts.

In the upcoming legislative session, Boner — whose family ranches in Converse County — will introduce a measure to repair that.

The draft bill, which was brought before the Tribal Relations committee in Fort Washakie on Wednesday, would impose a penalty of up to $750 and/or up to six months in jail for violating the new protocol. Perhaps more importantly it would establish guidelines for how Native American remains are handled, starting with a requirement on discovery to alert the county coroner, bringing in the state archaeological team to investigate within two days, and utilizing the University of Wyoming and collaborating with Eastern Shoshone and Northern Arapaho Historic Preservation offices on appropriate exhumation within the following five days. The tribes will also be responsible for working with other tribes and with aspects of the reinterment process.

The measure would require a search for descendants if the remains are not found to be Native American but from the immigrants who traveled through what is now Wyoming, such as those who followed the Oregon Trail, the Casper Star-Tribune reported .

“I’ve always said from the beginning our issues are with the federal government, not with the tribes,” Boner said of the drilling and private land conflicts that drove the bill. “It’s important that we find ways to come together.”

The measure has found favor from the tribes in Wyoming and it’s been shepherded in draft form by Sen. Affie Ellis, a Republican from Cheyenne who has worked on similar protocols in Colorado. Ellis is a lawyer with a background in federal Indian law. She is also an enrolled member of the Navajo Nation.

At the committee meeting in Fort Washakie, Ellis led lawmakers through the bill, explaining what it would accomplish and some of the amendments suggested by the Northern Arapaho and Eastern Shoshone tribes.

Lawmakers were cautious during the committee hearing that the bill, which originated as a way to help facilitate oil and gas development, achieved its stated goal: to respect Native American remains.

“If a pipeline was going through a cemetery made up from settlers from the 1850s . I’m trying to think what being respectful would mean to me in my culture,” said Sen. Cale Case, R-Lander.

Some lawmakers were concerned by the tight timeline for exhumation, which seemed arbitrary and risked undermining the respectful approach that the bill’s proponents stated as its main goal.

State Archeologist Greg Pierce said that the timeline was intended to get boots on the ground quickly and avoid weather damage, but it did not preclude the state’s team or the tribes from slowing down during the exhumation process.

“I think the idea is that we mobilize quickly and get out there,” he said. “Once we’re on the ground we need to take the time necessary to do this right.”

Boner’s bill is not the first attempt by lawmakers to create a framework for dealing with discovered graves and funerary objects. A similar bill died in committee during the 2009 legislative session.

The Tribal Relations Committee was approached with the bill as part of the draft process. Boner will introduce it, but lawmakers noted after the meeting in Fort Washakie that they may join the bill as co-sponsors, given the support of the tribes.

Devin Oldman, deputy director for the Northern Arapaho Historic Preservation Office, was a vocal critic of attempts to reduce Native American access to historic sites during the debate over drilling federal minerals from private land. He noted at the committee meeting that the tribes are often viewed with distrust when they show up at committee hearings to add their input.

“We’re just trying to advocate for our history,” he said. “We believe these areas are living. When we destroy these areas . it affects us in ways we don’t fully understand.”

Oldman suggested that the bill mandate a more binding agreement between the tribes and county coroners, such as what exists on the reservation with Fremont County. He also questioned the amount of the penalty, which is far below the federal land penalty of $100,000 for a first offense.

Boner, who listened to the committee meeting by phone, said that suggestion was “well-taken.” The penalty he’d suggested in the bill was similar to state law’s punitive charges for disturbing gravesites.

In a later interview, Boner stressed that the bill was still in draft form.

Though driven by the increase in oil and gas development in Converse County, the bill was also a chance to find common ground, he said.

Ellis, the senator from Cheyenne, said creating a protocol to follow would ensure that these sites, remains and artifacts are protected.

“The other piece is that they are treated with respect,” she said.