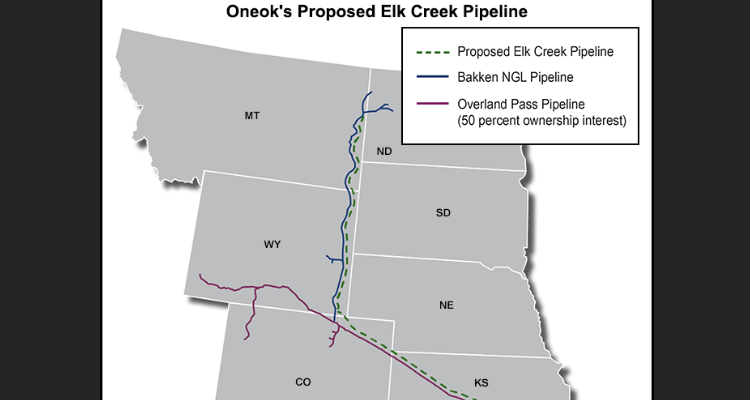 Currently in the planning stages, the Elk Creek Pipeline – an approximately 900-mile, 20-inch diameter pipeline that is expected to be completed by the end of 2019 – will have the capacity to transport up to 240,000 barrels per day of unfractionated natural gas liquids from near the company’s Riverview terminal in eastern Montana to Bushton, Kansas. The Elk Creek Pipeline is expected to cost approximately $1.2 billion, with related infrastructure costs expected to total approximately $200 million. The pipeline will have the capability to be expanded to 400,000 barrels per day with additional pump facilities.

A map of the proposed pipeline shows it spans It would cross Montana, Wyoming,and Colorado, north-south — running parallel to the Bakken NGL Pipeline — before turning southeast to run along the Overland Pass Pipeline.

“The existing Bakken NGL and Overland Pass Pipelines are operating at full capacity. Additional NGL takeaway capacity is critical to meeting the needs of producers who are increasing production and are required to meet natural gas capture targets in the Williston Basin,” said Terry K. Spencer, ONEOK president and chief executive officer. “The Elk Creek Pipeline will strengthen ONEOK’s position in the high-production areas of the Bakken, Powder River and Denver-Julesburg regions and also provide additional reliability and redundancy on our NGL system.”

ONEOK expects to finance the Elk Creek Pipeline with a combination of new equity, including approximately $450 million of net proceeds received from common stock issued during 2017 under its “at-the-market” equity program, with cash from operations in excess of dividends and short- and long-term borrowings.

The plan still needs to be approved by federal, state and local officials.