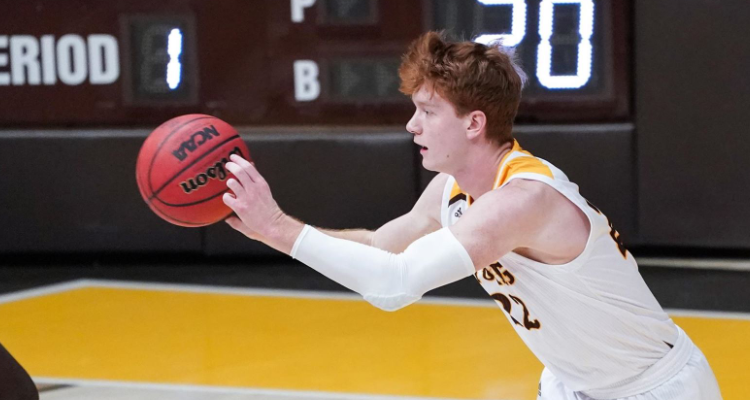 LARAMIE, Wyo. – A pair of runs by Boise State in the second half was too much for the Cowboys to overcome in a 65-54 loss at Boise State in ExtraMile Arena on Wednesday evening. The contest featured 46 fouls and the teams shooting a combined 84 percent from the charity stripe.

“Every time you get ready for an opponent you try to get out and take away of what they do best,” UW head coach Allen Edwards. “One of the biggest takeaways with a strong scoring team was taking the three ball away and we did that. We struggled giving them extra opportunities with turnovers and a lot of those were self-inflicted. We did a great job defending and adjusted to the whistle.”

Senior Jake Hendricks led the Cowboys with 16 points. He hit has hit five more threes in a game in his last three contests. Redshirt sophomore Hunter Maldonado added 14 points, as he has scored in double-figures in every game this season. Senior guard A.J. Banks led the Pokes with seven rebounds.

Wyoming recorded 21 turnovers in the contest, as the Broncos scored 26 points off turnovers for the most given up by the Pokes this season. Wyoming held Boise State to 39 percent from the field for seven points below their season average. BSU also held a 31-24 advantage on the glass.

“I told our guys if we complete like that and start taking care of the basketball gives us a great opportunity to win some basketball games,” Edwards said.

Both teams got off to a slow start offensively in the first five minutes of the first half. Banks put away the Pokes’ first points with a dunk with a layup from Maldonado and the Cowboy defense held the Broncos to 0-7 from the field to open the game.

Wyoming built the lead to 8-2 on a four-point play from Jake Hendricks with 14:13 left in the first frame. The Pokes got into foul trouble halfway through the half, as the Broncos used free throws to make it an 11-10 contest.

The Broncos would take their first lead of the contest with just under six minutes remaining in the first stanza, as Alex Hobbs hit a pair of free throws for a 16-15 contest. RJ Williams scored four-straight points to build a Bronco advantage to 20-16 with 3:25 left in the half.

Taylor stepped up late for the Pokes in the first half with six-straight points, but a buzzer beater at the buzzer gave Boise State a 27-24 lead at the half. Wyoming recorded 13 turnovers in the first half, as the Broncos scored 14 points off those miscues.

After a bucket by the Broncos, Hendricks and Maldonado add three pointers to make it a 30-29 contest two minutes into the first half. Banks would add an and-one play to build a Cowboy lead to 36-32 a minute later.

Justinian Jessup went on a 5-0 to build a 37-36 lead with 15 minutes left, but the lead was short lived, as Brandon Porter added five straight to make it a 41-36 contest with 14:25 left in the game. Jessup tied the contest with a jumper with just under 11 minutes remaining for a 41-41 contest.

After the bucket by Jessup, Boise State added five-straight points including an and-one play by Williams for a 46-41 lead for the Broncos with 9:47 left in the game. The run was halted by a Maldonado jumper for a 46-43 game with just over eight minutes left.

Boise State moved the lead back to 10 with under three minutes, but an and-one play by Maldonado made it 61-54 with 1:05 left. That mark was the closest Wyoming would get falling 65-54 to move to 5-10 overall and 0-3 in conference play.

Wyoming returns to action on Saturday heading to Colorado State for the first Border War of the season in an 11 a.m.