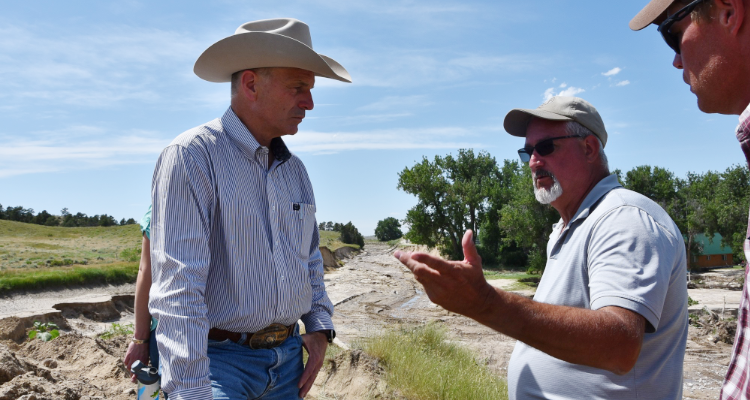 Goshen County, WY. – Wyoming and Nebraska could suffer an $89 million economic loss if crops on the 107,000 acres affected by an irrigation tunnel collapse near Fort Laramie are a total loss, according to information from the University of Wyoming and Nebraska Extension services.

Inspection and repairs have continued since the July 17 collapse and resulting breach of the Goshen/Gering-Fort Laramie Canal. The tunnel is a key component connecting water from the North Platte River to a canal system in Wyoming and Nebraska. The tunnel is 2,200 feet long, about 110 feet below ground and about 14 feet in diameter. It is unknown when water will be returned to the canal.

This economic impact model was produced with the best data available given the variability in agriculture, says Lee, based at the James C. Hageman Sustainable Agriculture Research and Extension Center near Lingle.

Other crops grown in this area were not considered due to lack of data, he says. Potential indemnity payments were not included because of the uncertainty of crop losses being covered by crop insurance.

“If farmers are unable to sell these commodities, there will be a negative impact not only on our farmers but also on main streets,” says Jessica Groskopf, Nebraska Extension regional economist.

“It is important for our communities to understand the hardships our farmers are facing and realize the loss of these crops will ripple through our economy.”