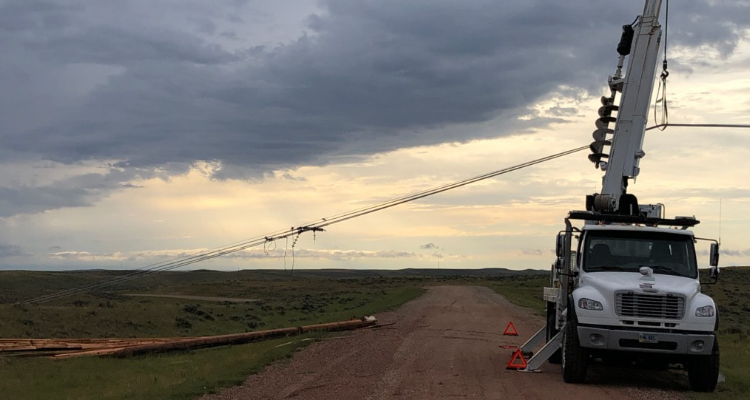 Significant damage to power poles and lines was observed west of Gillette, and in the Rozet and Moorcroft areas. Additional damage was incurred in the Upton and Sundance areas.

The largest area was a double circuit power line running along the D Road north of Moorcroft where high winds knocked down 25 poles. A major 69kV transmission line lost 13 structures between the Barber Creek and Bonepile substations affecting areas west of Gillette.

In addition, there are estimates of more than 30 distribution poles on the ground west of Gillette. PRECorp crews and a contractor mobilized late Sunday afternoon to begin the work, with the restoration work expected to last at least through Monday night and perhaps longer.

At the peak of the storm-caused outage, approximately 4,100 members of the electric cooperative were without power. Some outages were able to be restored more quickly as power could be rerouted over redundant lines. However, some areas were so extensively damaged, their power was out for several hours. Some members in the Rozet and Moorcroft areas are likely to be restored later Monday or early Tuesday.

“As always we are doing our best to restore power to our members as safely and quickly as possible,” said PRECorp VP of System Operations Rich Halloran. “This event was very widespread and we are fortunate to have shifts of linemen who work safely day and night to bring these impacted areas back on line.”

Safe restoration of power is the ultimate priority in an incident such as this. The public is urged to stay clear of damaged or downed power poles or lines. Assume all power infrastructure is energized.

Crews will be working throughout the service territory and will be using county roads and some narrow lanes to access lines. Drivers are reminded to give the crews room to work and stay clear of the busy areas where roads might be blocked by line trucks and trailers.