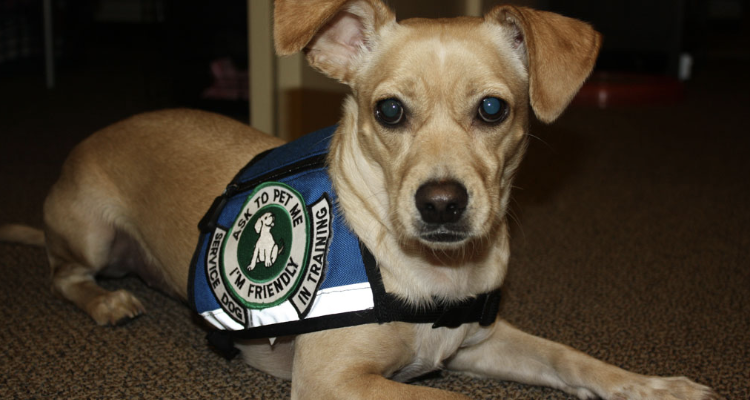 RAPID CITY, SD. (AP) | By ARIELLE ZIONTS, Rapid City Journal    –    After Chuck Brookens and his dog, Finn, walked on to a dock at Canyon Lake Park on a recent Friday, he bent down to comfort the nervous puppy, who is afraid of heights.

“Good boy,” Brookens said as he gave Finn a treat for sitting down.

While in this instance Brookens was the one caring for Finn, it’s Finn who is being trained as a professional service dog so he can comfort and help his owner, who has post-traumatic stress disorder after serving in the Iraq War.

He said Vallette called him a “prime candidate” for the program and linked him with two local organizations that assist veterans in finding, affording and training service dogs.

RescueX2, raises money for veterans who need help paying for a dog, and Super Dogs for Super Heroes helps veterans find and train a service dog ideal for their needs and lifestyle, Vallette said.

“I’m able to pair them up with these guys and help alleviate if you will, part of their PTSD. A lot of research has shown that service animals are relaxing for people,” said Vallette, who served in Afghanistan.

“Just him being a companion of mine helps me stay out of my own head … keeps me from just sitting there, dwelling on stuff in the past because I’ve got to focus on him and his needs,” Brookens said of Finn, a five-month-old miniature Australian shepherd.

Brookens said when Finn realizes that he’s feeling anxious, he lays down at his feet to calm him down. Finn also nudges Brookens to alert him to shadows, people and animals during walks or in crowds.

Wayne Swier, a 32-year-old veteran who served in Afghanistan, also got a service dog after Vallette encouraged him to do so.

Raz, a three-year-old boxer-pit bull mix that Swier adopted from a friend, helps Swier with his PTSD by keeping him calm and alert in crowds. In the future, he’ll also learn to wake Swier up during nightmares.

Swier, who wears an above-the-knee prosthetic after he lost part of his leg to a bomb in Afghanistan and uses a wheelchair to get around his home in Johnson Siding, is also training Raz to help him with physical tasks such as picking up dropped items and pushing his wheelchair toward him if he falls while walking.

Swier and Brookens bring their pets for service dog training with Becky Flanagan of Super Dogs for Super Heroes, and Swier also trains through online programs. Both said they feel comfortable working with Flanagan since she is a veteran herself.

Swier said he hopes other veterans seeing people like him take advantage of the new service dog program will encourage them not to be afraid to ask for help.

“I think (this program) will open door for more veterans being OK with, ‘OK I’ve admitted that I need the help with this, maybe I should also go to counseling too,'” Swier said.