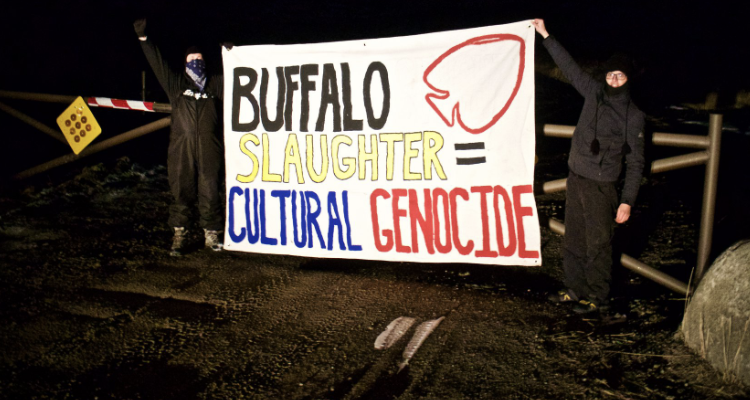 Yellowstone Nat’l Park   –   Two members of the group Wild Buffalo Defense, Cody Cyson and Thomas Brown, were arrested recently at the Stephens Creek buffalo holding facility as they tried to prevent the animals from being killed. On Tuesday, the protesters locked themselves to the bars of a pen that holds the animals for disease testing.

A third individual, Hanna F. Ponder, of Donnelly, Idaho, was also detained, in what a U.S District Court of Wyoming press release labeled as a separate incident. She was charged on March 7, with one count of entering a closed area in Yellowstone National Park. Ponder was located by law enforcement in the bison closure of the Reese Creek drainage area during the morning hours of March 6, 2018. Ponder appears to also be a part of the Wild Buffalo Defense group, based on posts found on the group’s Facebook page.

So far this winter, Yellowstone National Park has captured about 500 wild buffalo and placed them in the Stephens Creek facility near Gardiner, MT. The park quarantines the buffalo in the facility out of concerns that they could spread brucellosis to grazing cattle. The park has plans to round up between 600 and 900 buffalo this year for quarantine or slaughter.

Talon Brings Buffalo with Wild Buffalo Defense is a member of the Blackfeet Nation. He said his group wants the federal government to pull out of the Interagency Bison Management Plan, under which the animals are culled;

“… and work to restore buffalo to ceded treaty territory and the Plains once again and let the population expand, rather than keeping it at an arbitrary number of 3,000 for the cattle industry,” Brings Buffalo said.

Brings Buffalo believes that the Interagency Management Plan is designed to please the cattle industry, and says that there are no recorded cases of buffalo transmitting the disease.

The Interagency Bison Management Plan is described as a cooperative, multi-agency effort intended to guide the management of bison and brucellosis in and around Yellowstone National Park . According to the plan’s offical description it is designed to maintain a wild, free-ranging bison population, reduce the risk of brucellosis transmission from bison to cattle, and manage bison that leave Yellowstone National Park and enter the State of Montana. with a goal of maintaining Montana’s brucellosis-free status for domestic livestock.

There are about 4,800 wild buffalo in the Yellowstone herd – one of just a few wild buffalo herds left roaming in the United States.

A detention hearing will be held, for all three individuals, on Monday March 12th at 10:30 am at the Yellowstone Justice Center in Mammoth, Wyoming.