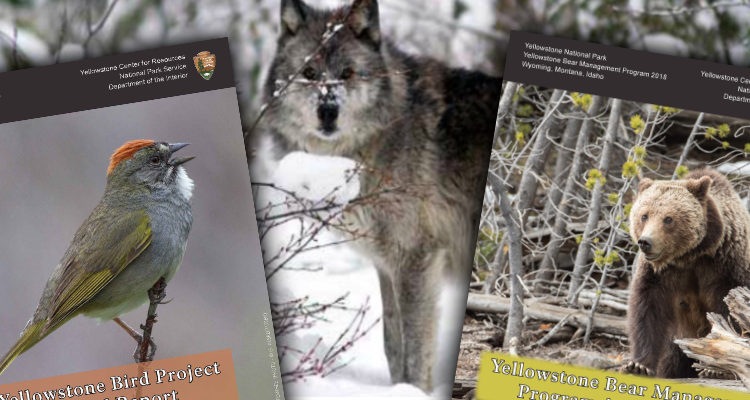 Yellowstone’s Bear Biologist Kerry Gunther said, “There were few bear-human conflicts inside of the park in 2018; however, managing visitors that stopped to view and photograph bears foraging in roadside meadows and thus creating large bear jams was a considerable management challenge.”

Biologist Lauren Walker said, “We used five methods to monitor breeding songbirds in 2018: point counts in willow stands and mature forests, transects through plots in sagebrush steppe, a banding station, and the North American Breeding Bird Survey (BBS). We recorded 35 songbird species within three willow growth types and captured at least 32 species at our banding station in a willow-lined riparian corridor. Observers recorded 24 species in mature forests and 29 species in sagebrush steppe. We also observed over 3,100 individuals belonging to 82 species along three BBS routes in the park.”

Doug Smith, Yellowstone Wolf Project leader says, “In 2018 we noted a drop in pup numbers, however there were no intra-species wolf killings, which is usually the reason for the most wolf mortality. This year marks a 10-year period of relatively stable wolf numbers. While the reasons for this are unknown, a relatively stable elk population is likely a large factor.”