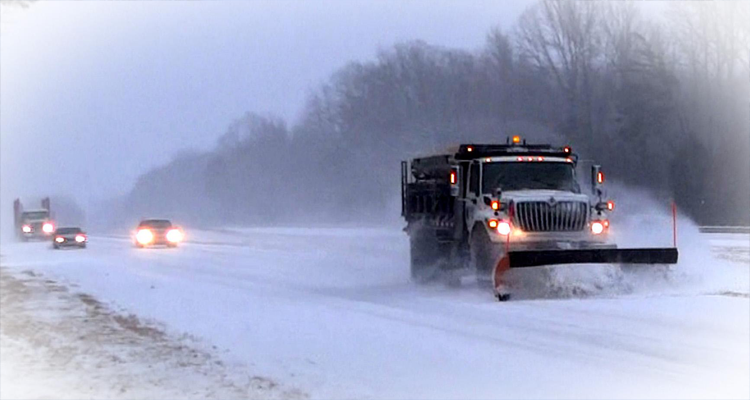 Cheyenne, WY. – Snowplow drivers are asking for help from citizens following a handful of near misses already this winter involving citizens’ vehicles and snowplows.

Driving near snowplows requires care and patience, and snowplow drivers are reporting risky behavior from drivers this winter, including passing the Wyoming Department of Transportation’s new tow plow in Fremont County, passing other trucks and tailgating.

WYDOT snowplows are out on the highways every day and many nights, and WYDOT employees are attempting to provide a safe, high quality and efficient transportation system for the citizens of Wyoming.

WYDOT deploys many bright yellow snowplows when battling snowstorms, and when working the roads, these plow trucks have amber, red and blue flashing lights mounted on top of the cab and on the back of the sanders.

These snowplow professionals need cooperation from drivers so they can do their jobs and keep the road safe for drivers. Give them room to operate.

“Stay well back from operating snowplows,” said WYDOT District Maintenance Engineer Lyle Lamb of Basin. “They are spreading sand and anti-icing and de-icing chemicals on the roadway. It’s always a good idea to stay back from snowplows while their operators are doing their jobs.”

Snowstorms this winter haven’t yet brought deep snow to northwest Wyoming’s valleys. “Our guys have been out there spreading sand and using salt brine to break up ice,” Lamb continued. “Please drive on the areas where sand the chemicals are being applied. This driving behavior helps break up the snow and ice. Please understand what our guys are doing, and please, don’t pass the plows.”

With limited visibility, snowplow drivers can’t see vehicles behind them if the vehicles are too close to the plows. As the old adage goes, if you can’t see the plow driver’s mirrors, he/she can’t see you.

“Remember, the safest driving surface is behind the plow. If you must pass, don’t pass on the right into the plume of snow being moved,” Lamb said. “Be sure on two-lane highways that you have plenty of time to pass. Keep a close watch, these huge plows often stir up their own whiteout conditions while doing their work.”

A tow plow was used extensively for the first time last winter in the Riverton and Lander areas, and other parts of the state. A second tow plow in northwest Wyoming will be assigned to the Cody and Powell areas this spring.

Lamb said the tow plow is a trailer mounted, 26-foot plow that is towed behind a 10-wheeled plow truck. It has the capability of plowing and treating the highway with salt brine on an entire additional lane of roadway at normal highway speeds when completely deployed. The entire trailer unit shifts to the right, using movable axles on the trailer unit as well as hydraulic controls between the truck and trailer. It can take the place of another plow truck by allowing one truck to plow two lanes of roadway, or a single lane of roadway and an eight-foot shoulder.”

Goals for operating a tow plow during the past two winters on Fremont County highways include improved highway safety and snow-plowing efficiency.

“The tow plow does the work of two trucks, and it has proven effective in Fremont County. The problem we’ve had early this winter is citizens passing the tow plow while it’s operating,” Lamb said. “Our drivers have even reported citizens passing the tow plow on the right side of the highway while it’s discharging snow from two lanes of highway in the same direction. It’s unsafe and could result in a costly crash where someone could be seriously injured, or worse yet, the person could die.”