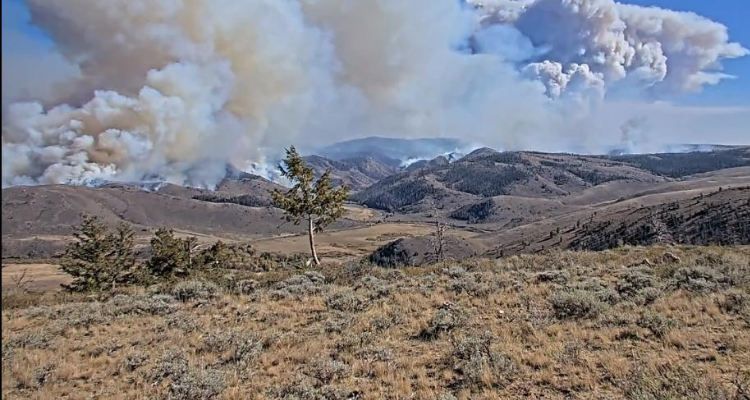 A forecast calling for at least several more days of dry, breezy weather offered little help in the fight against the Cameron Peak Fire 20 miles west of Fort Collins, Colorado, or the Mullen Fire 100 miles west of Cheyenne, Wyoming.

They are two of the Rocky Mountain region’s biggest fires in recent years. Each was burning through rugged pine forest dotted with communities of cabins, many of which aren’t inhabited year-round, Both were approaching 200 square miles in size.

The Cameron Peak Fire became the third-largest in Colorado history since starting Aug. 13 and was the priority of firefighters in the state, Gov. Jared Polis said.

Ninety-five structures, including about two dozen homes, had burned in the fire spreading through the upper Cache la Poudre River drainage, deep within the Front Range. About 960 people were involved in firefighting efforts , the Coloradoan reported.

Polis met Wednesday with firefighters and others at a command center in Fort Collins as the fire came within 2 miles of the cabin communities of Crystal Lakes and Red Feather Lakes, which had been evacuated.

The largest fire in Colorado history, near Grand Junction, burned about 215 square miles and was contained on Sept. 15.

About 25 miles northwest of the Cameron Peak Fire, the Mullen Fire spread into northern Colorado after burning across Wyoming’s Medicine Bow National Forest, a distance of over 20 miles.

The fire’s intensity made it difficult for sheriff’s officials to maintain a current tally of damage, but it had destroyed at least 29 homes and 31 other structures in Wyoming since starting in the Savage Run Wilderness on Sept. 17.

The fire had burned across most of Savage Run and on Wednesday ran up the North Platte River drainage to finish burning the entirety of the Platte River Wilderness. The 37-square-mile wilderness is a prime trout fishing destination.

The fire closed two state highways north of Walden, Colorado. Mandatory evacuation orders were in place for the Wyoming cabin communities of Albany and Woods Landing.

About 900 people were involved in fighting the fire while helicopters and airplanes scooped water from lakes and a reservoir to dump on the flames.

The biggest Wyoming community potentially at risk was Centennial, population 270, where officials urged residents to be ready to evacuate should the fire spread eastward onto the open, sagebrush-covered Laramie River Basin.

Forecasters were somewhat optimistic that higher humidity with the arrival of a front Friday could help slow the fires’ afternoon flare-ups. The forecast also called for windy weather, however, through at least Monday.

Both fires were sending at times thick clouds of smoke onto the western Great Plains. The National Weather Service posted air quality alerts for the mountains and an area from Cheyenne to south of Denver.

Elsewhere in the region, crews were still battling a fire near Fraser, Colorado, that had burned 20 square miles and a fire near the Steamboat Springs ski resort community that has burned 12 square miles.