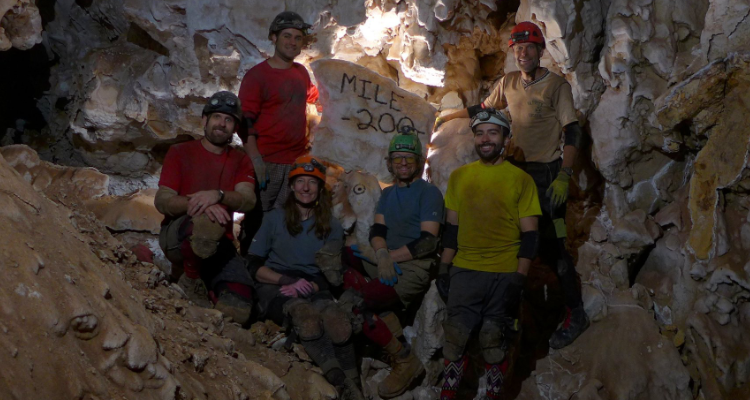 CUSTER, SD. – A team of six volunteer cavers entered Jewel Cave this past Saturday, December 15, and made their way to Deep Camp, surveying in passages along the way. The cast of cavers included four members from the Black Hills area, Christopher Pelczarski, Adam Weaver, Rene Ohms and Dan Austin, along with Stan Allison of Colorado, and Garrett Jorgensen of New Mexico. By the end of day one, the group had mapped 1,713 feet of passage within the cave system, with only 56 feet remaining to be surveyed to reach the 200th mile mark.

The next day, the team traveled southeast another four hours to the end of the cave, before surveying the mile marker that they had been waiting for. Taking the final shot, they called the survey station #MILE200. The station label was written with soot from a carbide lamp, homage to past days of exploration and all of the explorers who have helped reach this point over the years.

After surveying the milestone marker, the group split into two teams, with one team surveying in passages going southeast and another team surveying in passages going west and south. The cave is very large and complex, and it is not clear where it continues in this area. It will take more trips to discover the main way onward. One team found a room with continuous water dripping, calling it “Those Underground Falls,” and the other team discovered a 7-foot tall, 5-foot diameter stalagmite, the largest active stalagmite in the cave.

Both teams surveyed over 1,600 feet for the day, putting the trip total at 3,338.75 feet. They returned to DeepCamp to get some rest and headed out of the cave the following day. The cavers left Deep Camp at around noon on Monday, December 17, and exited the cave at 8:00 pm to a wonderful celebration and potluck attended by around 50 people, eagerly awaiting their arrival.

Jewel Cave is located 12 miles west of Custer in the Black Hills of South Dakota. It is the third longest cave system in the world when ranking mapped miles, The second longest cave is Mammoth Cave located in Kentucky.