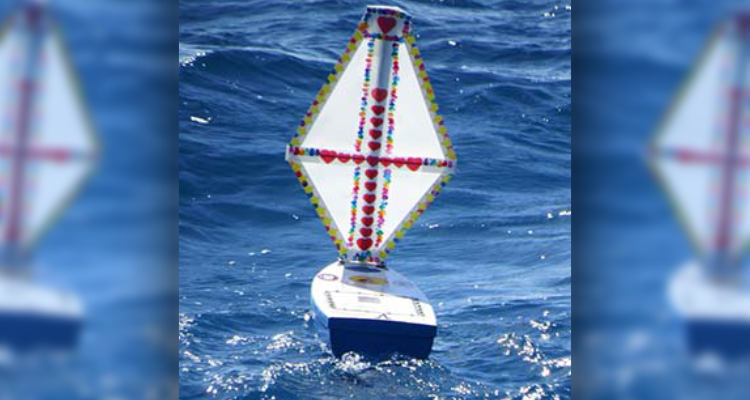 LARAMIE, Wyo. – In March 2019, Michael Cheadle and Theresa Williams helped launch a small sailboat near the Marion Rise in the South Indian Ocean. After traveling more than 8,000 nautical miles over 463 days, the Sacred Heart Star of the Sea landed at Dalyellup Beach, near Bunbury in Western Australia.

On June 27, the 5.5-foot-long unmanned vessel — with its trinket treasures and more than 50 student letters contained inside — washed ashore. The small boat, minus its mast and sail, was delivered to Australind Primary School in early July.

“The Indian Ocean is a big ocean and, so, the miniboat was likely to sail huge distances,” says Cheadle, a University of Wyoming associate professor of geology and geophysics. “But, I had no idea whether it would go to Australia, or stay south of Australia and head even farther eastward toward the Pacific Ocean.”

During the National Science Foundation-funded voyage of the U.S. research vessel Thomas G. Thompson, Cheadle had the responsibility of deciding where to launch the Sacred Heart Star of the Sea in the survey area, which was located in the South Indian Ocean. Students at Sacred Heart School, a private coeducational school in Kingston, Mass., built the boat from a kit in 2019.

Theresa Williams, a middle school teacher at the UW Lab School, who served as the “Teacher at Sea” aboard the Thomas G. Thompson voyage, helped finish sealing the boat’s hull after adding a few souvenirs from the crew and some mantle rock from the Indian Ocean floor. She even attached the boat’s sail to ready it for launch. She says readying the ship was part of her Zoom presentation when they spoke remotely with schoolchildren around the world.

“I’m not too surprised that the boat made it to Australia. It’s quite exciting,” Williams says. “We wondered if it might make it into the circumpolar current or if it would wash up on land.”

Carol Smith, a teacher at Australind Primary School, and her husband, Brian, found the boat while walking their dogs on the beach.

“We saw it coming toward shore and read the message on top that said to contact Educational Passages,” Carol Smith said in a media release from Educational Passages, a nonprofit with a mission to connect students around the world to the ocean and each other. The organization also sells the miniature boat kits.

“When we found out the boat’s name was Star of the Sea, we couldn’t believe it because we were married at the Star of the Sea Catholic Church in Perth nearly 30 years ago,” Carol Smith said in the media release.

“Many students were hoping the boat might circumnavigate the globe and, even though it didn’t, we couldn’t have asked for a more successful voyage,” says Winifred Dick, a teacher at Sacred Heart School. “As a teacher, I’m very excited for the students who now get to connect virtually half a world away.”

Cheadle says he and his wife, Barbara John, a UW professor of geology and geophysics, lobbied Henry Dick, chief scientist for the Thompson cruise, and his wife to purchase a miniboat kit and have her students build it so that Cheadle and Williams could launch it in the Indian Ocean.

When the Sacred Heart Star of the Sea was nearing Australia and Perth, Cheadle and John asked Bill Power, a consultant geologist in Fremantle, if he would be interested in recovering the boat. Power and John were classmates in graduate school at the University of California-Santa Barbara.

Power, who has two boys in school, gathered up parents to search for the small craft. They had no luck, as the boat landed south of where Power and his friends were searching. After learning who discovered the miniature vessel, Power eventually connected with the Smiths. They agreed that the miniboat should be displayed at various different Western Australian schools and at the local town council, Cheadle says.

“I’m glad it’s in Australia and the teachers there are taking advantage of having it. It’s wonderful that it’s touring around. Lots of students are thinking about where it came from and how it got there after being built by American students,” Williams says. “I hope students will take a look at a globe and think about the ocean currents and winds, and wonder about how floating objects can travel such vast distances.”

“The plan is to repair the boat and eventually relaunch her,” Cheadle says. “If she could be launched from northwest Australia, she would likely catch the westward flowing northern limb of the Indian Ocean Gyre and head back to Africa.”

Williams, Cheadle and John previously were part of the launch of The Jackalope — a similar miniboat built by students at the UW Lab School — that had its own adventure. The Jackalope originally traveled about 7,600 miles during its initial 190-day voyage. The sailboat eventually washed ashore at Ontong-Java Atoll — one of the most remote atolls in the world — Aug. 21, 2017. The atoll is located just north of the Solomon Islands and east of Papua New Guinea.

The small vessel was eventually repaired, with the help of George Kaola, a schoolteacher in the Solomon Islands. The Jackalope launched again in January of this year from the Solomon Islands; traveled 3,151 nautical miles in 114 days; and eventually landed on the island of Vanuatu in May. Kaola and John helped organize another rescue mission by encouraging friends in Vanuatu to recover The Jackalope in June.