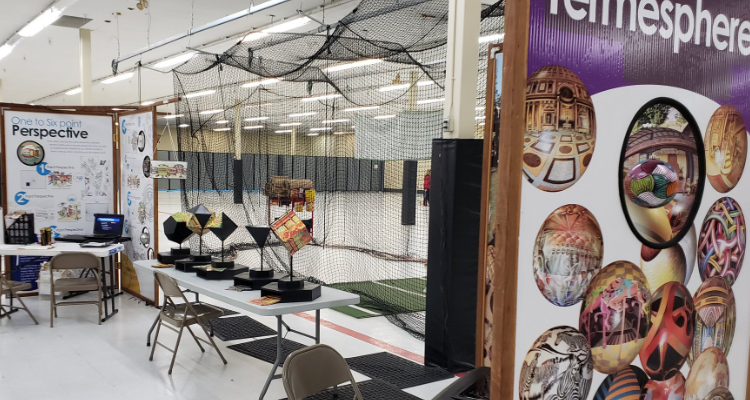 SPEARFISH, SD. | By KAIJA SWISHER, Black Hills Pioneer (AP) — In the midst of patrons running laps and playing pickleball, a display devoted to the art of perspective is currently set up in the Lookout Room at the Spearfish rec center. A group of eighth-grade students recently got to explore the “Up, Down, and All Around” display with its creator, Spearfish artist Dick Termes.

Termes is known across the globe for his Termespheres, varying sizes of spherical wonders that feature the artist’s signature six point perspective, the Black Hills Pioneer reported. Termes chooses the “rotating point,” or center of the sphere, which determines the perspective one sees, as the rotating point is as if standing inside the sphere itself. The six points are then directly above, below, in front, behind, and to each side, equally spaced.

Termes explained that the display, which features different stations that allow participants to explore drawing, perspective, 3D geometries, 2D and 3D puzzles, and more, was originally commissioned by the South Dakota Discovery Center in Pierre. The hands-on center had created a series of displays, with topics like electricity, dinosaurs, insects, etc., that could be contained within trailers that different groups could check out to use in libraries, schools, etc. The center approached Termes about creating one focused on Termespheres, so he created the display, which was then used by the center for a number of years.

After the center stopped utilizing the trailers, Termes bought the trailer and display, which he uses at different locations and gallery shows.

“It is really pretty fun, and I would love to get more students through it,” he said, describing that the display will be up at the rec center through March before heading to the Dahl Arts Center in Rapid City where Termes has a show.

Eighth-grade students in art teacher Brandi Roetzel’s classes recently went through the display with Termes, after he had visited their classrooms previously to help them create their own Termespheres.

Roetzel said that the experience brings the students out into the community, getting them out of the classroom, up, and moving.

“They get to see a local artist, and he’s also a world-famous artist,” she said, describing that all of the different elements in Termes’s techniques show the students that art is more than the traditional methods that come to mind.

Roetzel said she is looking forward to bringing in another group of students to the display during the upcoming trimester.

For more on  Spearfish artist Dick Termes, and his Termesphere Gallery visit his website or YouTube page.