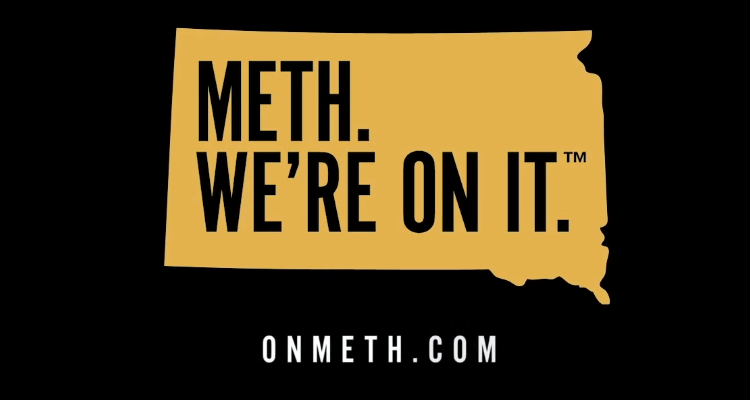 SIOUX FALLS, S.D. | By STEPHEN GROVES, (AP) — South Dakota sparked online guffaws Monday by rolling out an anti-drug campaign featuring people saying, “Meth, I’m on it,” and the governor said the backlash proves the effort to raise awareness is working.

The nearly $1.4 million campaign aimed at tackling the state’s methamphetamine epidemic includes $449,000 paid to the Minneapolis-based ad agency that created the tagline. A press release for the campaign said it uses “impactful, even shocking” images of South Dakotans to try to communicate that meth should be tackled by everyone.

The images featured the words, “Meth. I’m on it.” over photos of people in cowboy hats, in a coffee shop or on a football field.

“We didn’t want this to look like every other anti-drug campaign,” said Laurie Gill, the Secretary for the Department of Social Services, which oversaw the campaign.

Many on social media joked about the images making it appear the people in the photos are on meth.

One Twitter user posted, “It seems that if I’m on meth, I can live to a ripe old age, eat in restaurants, play football with my pals, and have a family. That sounds much better than the life I’m having now. Somebody get me some meth.”

Another Twitter user posted: “Surprising anti-meth campaign in South Dakota. With the theme ‘Meth. I’m on it,’ what could go wrong?”

Gov. Kristi Noem defended the campaign, posting, “Hey Twitter, the whole point of this ad campaign is to raise awareness. So I think that’s working …”

Noem, appearing in a video for the campaign, said South Dakota’s meth problem is “growing at an alarming rate.” According to the state’s Department of Social Services, the number of 12- to 17-year-olds who reported using meth in the last year is double the national average. The state has also seen the number of people seeking treatment for meth addiction double from 2014 to 2018.

The ad campaign includes a website, billboards and TV ads that will run through May. Gill said the price paid to Broadhead Co. to produce the ads was justified considering that meth addiction is on the rise in South Dakota.

“This is a huge issue,” she said. “And we’re willing to do what we have to do to get people on it.”