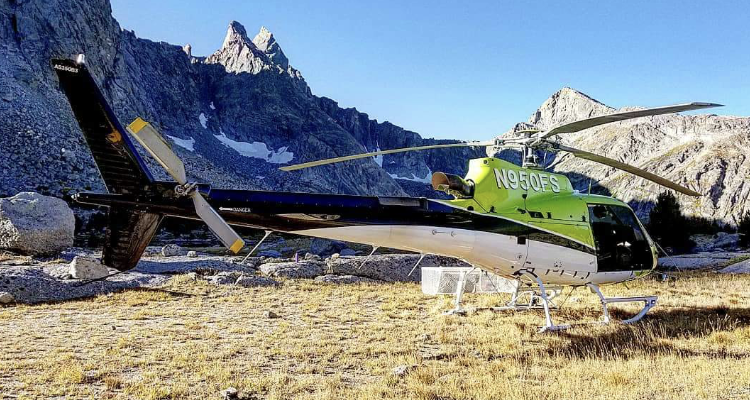 Pinedale, WY.   –   At around midnight, on Saturday, September 1st, Sublette County Sheriff’s Office Dispatch received a call from a couple of climbers that were stranded on the Northwest face of Wolf’s Head Peak in the Cirque of the Towers. The climbers were stuck on the mountain just short of 12,200 feet. Their rappelling rope had become stuck in the rocks after earlier climbing the East side route. The climbers reported they had supplies to spend the night on the three-foot ledge they were on, but would need assistance in the morning.

The morning of September 2nd, at first light Tip Top Search and Rescue sent a Short Haul team to the area with the use of the helicopter and arrangements were made to make a drop of additional rappel rope, a team radio, water, and extra food as the stranded male was a Type 1 diabetic. The two felt they were in good enough condition to self-evacuate with the supplies given. TTSAR’s Short Haul team landed in a nearby meadow to wait and monitor their decent if they needed further assistance.

Over the next couple of hours, the two had become disoriented and struggled to continue the self-evacuation. They had lost a bag with personal gear and medical supplies to care for the male’s diabetic needs. The male’s medical condition was beginning to worsen and his climbing partner knew they needed help. The female party was able to communicate with the awaiting search and rescue team and plans were made for an extraction site. The Short Haul team rigged the helicopter and despite high swirling winds on the cliff face, successfully brought both members off the mountain to the meadow below via short haul. The helicopter subsequently flew all parties to the Pinedale Ralph Wenz Airport where Sublette EMS was waiting to evaluate both climbers. The male was taken to the Pinedale Medical Clinic for further care.