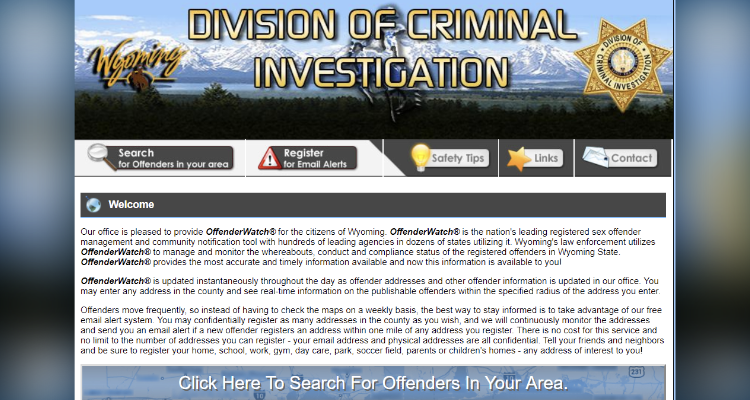 Sheriff Mike Lowell said the teams of county and federal officers carried out 96 registered offender compliance checks March 12 – 14. Of that number, 90 offenders were found to be compliant. The U.S. Marshals Service has opened cases against two non-compliant offenders, the SCSO is submitting their reports for prosecution of three more, and one case is still under investigation.

Under Wyoming law, sex offenders as defined in statute must be in compliance with state law by registering with the state Division of Criminal Investigation through local Sheriff’s Offices. Offenders are photographed and fingerprinted and must also provide a range of information, including address, place of employment, and vehicle information. They must notify authorities if they move or change jobs. Offender’s photographs and other information are then posted on the DCI website at http://wysors.dci.wyo.gov/sor/ .

The United States Department of Justice maintains a national sex offender registry website at www.nsopr.gov, which is called the Dru Sjodin National Sex Offender Website after Dru Kathrina Sjodin, a University of North Dakota student who was the victim of kidnapping, rape, and murder in 2003 at the hands of convicted sex offender Alfonso Rodriguez, Jr. Rodriguez was convicted of Sjodin’s murder and sentenced to death in 2006.

“We carry out these checks to ensure that registered offenders are where they are supposed to be and in compliance with the law. If they’re not, we charge them,” Lowell said.

Officials named the sweep “Operation Jessica” for nine-year-old Jessica Marie Lunsford, who was abducted, raped, and murdered in Homosassa, Florida in 2005 by 47-year-old John Couey, a convicted sex offender who lived near her. An autopsy determined that Couey buried Jessica alive in garbage bags and she suffocated to death.

A Florida judge sentenced Couey to death in 2007, but he died in prison of natural causes in 2009.

The United States Marshals Service involvement in the sweeps stems from the federal Sex Offender Registration and Notification Act, or SORNA, which is Title I of the Adam Walsh Child Protection and Safety Act of 2006. SORNA requires convicted sex offenders to be in compliance with statutory registration requirements. Failure to comply can subject offenders to punishment of imprisonment for up to 10 years.

The Sweetwater County Sheriff’s Office website provides a link to the state’s sex offender registration pages at http://wysors.dci.wyo.gov/sor/ . To check on who the sex offenders are and where they are living throughout the county, people can go to the DCI website and there use the OffenderWatch link to get the information they need. The mapping and address features found on the website pinpoint exactly where offenders live.

Also available at the website are a range of other resources, such as the ability to sign up for free automatic email notifications informing you if an offender moves within a specified radius of any address registered.