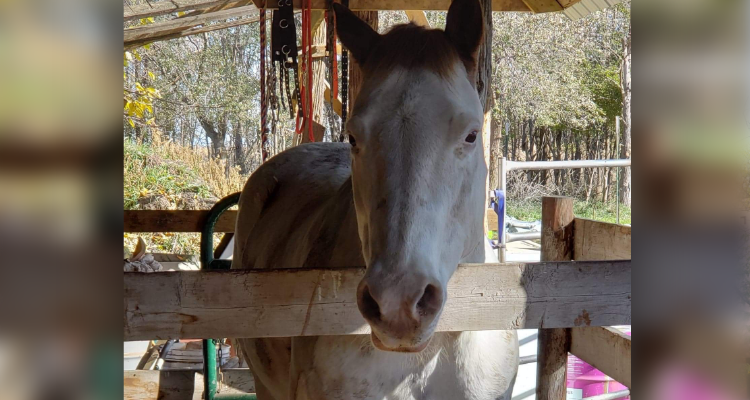 The two had just completed a therapy session with a veteran. It’s a warm-in-the-sun, breezy September Wednesday at the DTOM/22 Ranch just north of Warner. Max shows his spirit as he nuzzles Reder and taste tests a harness lead and a fence panel. He’s not shy and extends a salutation with his pink, peach stubble muzzle as a human would a fist for a bump.

Max is a large Medicine Hat paint and a therapist. He was trained at the Horseback Miracles Ranch in Perry Park, Colorado, to be used in equine-assisted Draper sensory method therapy by the method’s founder, Terry Draper. Reder brought Max to South Dakota to add to the services he provides to veterans at the ranch, the Aberdeen American News reported.

“Mr. Draper has been perfecting this method for approximately 22 years and uses it daily at Horseback Miracles to help at-risk youth and autistic children. He just recently started looking into veteran uses, and that is when we met and became involved with them,” Reder said. “This type of therapy helps our struggling heroes with PTS (post- traumatic stress), TBI (traumatic brain injuries), chemical dependency, all kinds of different types of neurological issues, and it neutralizes the stress hormones and resets the chemical imbalances in the brain.”

A traumatic brain injury survivor, he shared brain scans from before and after sessions of horse therapy. Scans from before his therapy are lit with red, indicating stress and increased cortisol levels. Cortisol is a stress hormone, he explained. In later scans, green is the dominant color, showing reduced stress and cortisol levels. He also provided scans from a Vietnam War-era doctor. The before scans show red around both hemispheres of a brain and clear or blue in the same locations in the after images.

“We worked very hard to raise the money for the schooling to purchase Max and (to) build the arena and lean-to shelter to house him because we need a real sense of urgency. Veteran suicide is not going away, so we need to do more immediately,” Reder said.

His efforts to help fellow veterans have culminated in a plot of land with large trees, a house, a new sheetmetal building and relics of past agricultural life. The land has been in Reder’s family for five generations and he now leases it from his parents for nothing. An arena has been added, as well as Max’s and JJ’s shelter.

The place will eventually serve as a retreat for veterans suffering from post-traumatic stress disorder, brain injuries and other maladies. The facilities Reder is looking to add are long-term goals, but he also pushes for ways to serve veterans immediately, so Max was made a priority.

The way it works is Reder takes a rider around the arena on Max. First the rider sits forward on just a saddle pad so a physical connection to the movement of the horse is maintained. Then Reder instructs and assists the rider to turn around backward on the horse. Max takes this in stride and seems just a bit bored.

The backward motion is unfamiliar but was easier than anticipated for me.

Reder begins to walk Max again. Then with some clicks, the horse goes into a pleasure riding trot. I was instructed to close my eyes and focus on the movement of the horse.

The ride is not easily explained. The sense of well-being afterward could easily be attributed to Max, and getting outside for a bit didn’t hurt.

Reder stops Max after a few rounds and instructs me to open my eyes. He asks about dizziness. He leads subsequent, similar jaunts. Max is settling into the rhythm. As I lean into the rhythm of the horse, both a disconnect and connection occur. It’s too trite to say I became one with the horse. It was like I floated, and Max was the grounding — a bit like a balloon with Max being the string.

The next day, Reder asks for feedback after a night’s sleep that he assured would be a good one. I didn’t sleep any longer than usual, but upon waking I felt an alertness I had not felt in a while.

Done with his work, Max settles back into the lean-to where he begins to paw the ground and slowly spin in a circle.

Max squats down, flips over takes a roll in the dirt. He gets up and saunters back to Reder and stares him down. The man’s face brightens as he remembers it’s treat time. He digs in a nearby bag, and Max accepts his payment for a job well done.

The DTOM/22 Ranch is named after the phrase Don’t Tread On Me and the Department of Veterans Affairs statistic of years past that an average of 22 veterans or armed services personnel died each day from suicide. More recently, the number dropped to 20. And the latest number, using data through 2017, is 17.

At least a portion of that drop can be attributed to a change in calculation of the statistic, Reder said.

The VA removed troops who were not federally activated from its count, according to an article by Stars and Stripes. Reder thinks the data reflects an undercount of what is really happening. Whether the average is 17 or 22, it’ll always be too high.