Three ball too much for Cowboys to overcome in loss to Air Force, 86-77 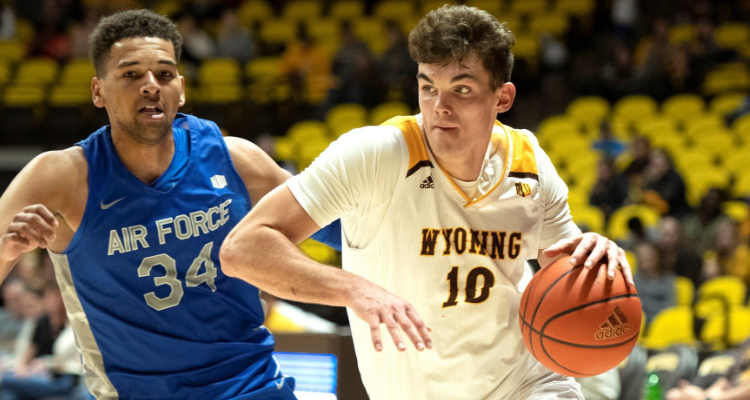 Three ball too much for Cowboys to overcome in loss to Air Force, 86-77

LARAMIE, Wyo. – The Wyoming Cowboys ran into hot three point shooting in a 86-77 loss to Air Force on Wednesday evening in the Arena-Auditorium. The Falcons hit 17 three pointers in the contest, as it was the most by an opponent in Arena-Auditorium history. Wyoming falls to 3-6 overall and 0-1 in MW play with the Falcons improving to 4-5 overall and 1-0 in the conference.

“What I shared with the team is I thought we got into an offensive battle tonight,” UW head coach Allen Edwards said. “I thought we started the game very strong defensively and then we got caught up with the scoring piece. Our offense will come, but we have to stay true to our defense and I thought tonight we didn’t play great defense.”

Wyoming was led by redshirt sophomore Hunter Maldonado with 18 points, eight rebounds and a career-high nine assists. He has scored in double-figures in every game this season. He has scored in double-figures in 15 of his last 17 games dating back to last season. Senior Jake Hendricks added 17 points hitting five threes on seven attempts. Sophomore Hunter Thompson added 17 points on 6-of-8 shooting.

The Pokes held the Falcons scoreless for the first four minutes of the contest building a 5-0 advantage. But Air Force responded with a 7-0 run led by LaVelle Scottie to take a 7-5 advantage with 14:20 left.
Hendricks would hit his third three of the contest, which gave Wyoming an 11-10 advantage with 11:24 left in first frame. But the Falcons went 5-of-5 from the field and took a 21-11 lead halfway through the half.

Air Force would follow that up by making four-straight field goal attempts to take a 32-22 advantage with 3:17 left in the first frame. To that point of the contest, the Falcons were 7-of-11 from behind the arc.
The Falcons would take a 38-29 advantage into the half shooting 48 percent from the field. The difference in the frame was seven second chance points by the Falcons on six offensive rebounds.

The Pokes would go on a 9-0 run early in the second half to make it a 40-38 game in Air Forces favor. A put back dunk from A.J. Banks and a three pointer from Thompson highlighted the run by the Pokes. But another hot streak by the Falcons made it a 59-46 contest with under 14 minutes remaining. AFA made five-straight from the field and went 12-of-18 from behind the arc to that point of the game.

The Pokes would go over five minutes, as the Falcons built a 75-58 advantage. Wyoming would answer with a 10-0 run over two minutes to make it a 78-71 contest. Wyoming hit four-straight field goals during the surge with Kenny Foster adding five points. But the Falcons closed out the contest and earned the win 86-77.

“I like my group of players and the way they come and work everyday,” Edwards said.”The first four minutes of both halves, that was our brand of basketball. When your back is against the wall you like to see no give up. But we don’t want to put ourselves in that position.”

The Falcons were led in scoring by AJ walker with 20 points to lead five players in double figures. He also led the team with seven rebounds and seven assists. Scottie added 19 points with Ryan Swan adding 17 points and five assists.
Wyoming hosts New Mexico on Saturday at 2 p.m. Wyoming will honor former Cowboy Fennis Dembo prior to the contest and the first 3,000 fans will receive a Fennis Dembo Bobble Head.

“It is an unbelievable deal,” Edwards said. “I can be anywhere in the country and they see Steamboat the first thing they say is Fennis Dembo. People remember his run and what kind of player he was. He was electrifying. He is a great person and tells great stories and I’m so happy for him and we want the fans come out and support Fennis. He has made an impression on his program and the State of Wyoming.”