Two tornadoes confirmed in Monday storms, one an EF2 nearly half a mile wide 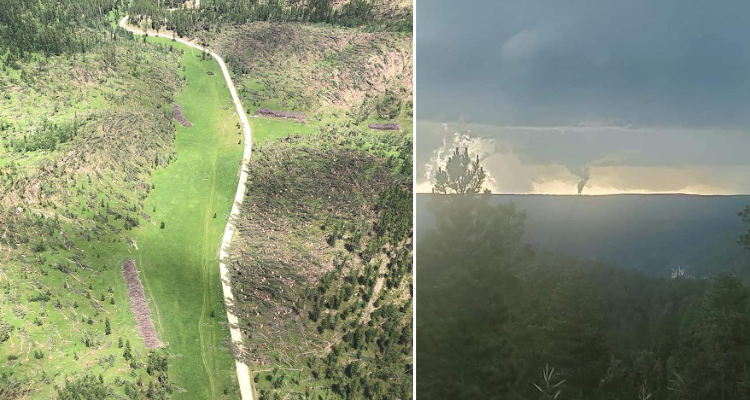 Two tornadoes confirmed in Monday storms, one an EF2 nearly half a mile wide

CROOK COUNTY, WY. | BLACK HILLS, SD. – The results of the investigations into two tornadoes which occurred on the afternoon of July 6, are in. These powerful thunderstorms developed across northeastern Wyoming and southeastern MT., late afternoon on Monday, and merged/strengthened as they moved over Sundance and into the Black Hills area.

The first tornado of the day was confirmed by video and began approximately 8 miles NNW of New Haven, WY., near Driscoll Creek. This tornado moved slowly southeastward for approximately 8 minutes, traveling over largely unpopulated portions of northwestern Crook County with limited vegetation. Due to a lack of discernible damage, an official rating for this tornado could not be determined. Several other funnel clouds were reported around the Sundance area, and Sundance received some wind damage from the storm.

The second tornado was reported west of Riflepit Canyon, to the south of Cement Ridge, in far southeastern Crook County. It produced widespread damage, snapping and uprooting trees. Moving across the state line, the tornado traveled east-southeastward into Lawrence County, SD., where it produced widespread tree damage across Tinton Road and Limestone Road. This tornado lasted for approximately 20 minutes and traveled for over 7 miles. The scope of tree damage, with a swath nearly half a mile wide at times, indicated that this was a significant tornado. This damage was consistent with estimated maximum wind gusts of 120 mph, corresponding to an enhanced Fujita scale rating of EF2.

Tennis ball to baseball sized hail was reported over parts of northeastern WY, the Black Hills, and the Rapid City area. As the storm tracked eastward, it developed into more of a wind producer. Winds up to 75 mph were reported across parts of south central South Dakota.

A lot more photos and video are available here.