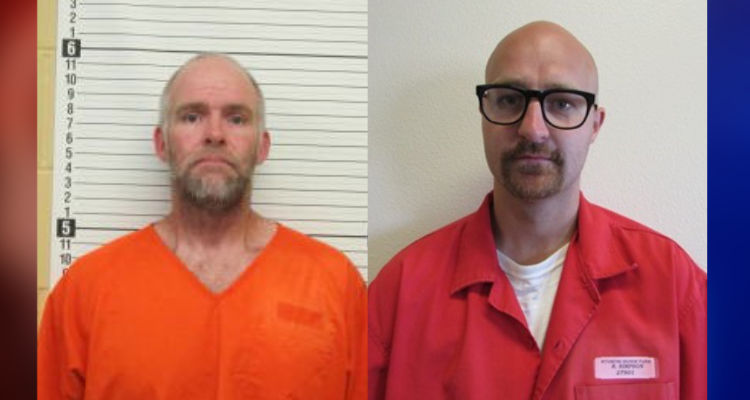 NEWCASTLE, WY. – Inmates Jason Green and Robert Simpson are on escape status from the Wyoming Honor Conservation Camp in Newcastle, Wyoming as of 10:30 pm on Sunday, September 22nd, 2019.

Green is serving a sentence for Larceny. He was sentenced in 2015 to 3 to 8 years.

Simpson is serving a sentence for Aggravated Burglary w/Weapon. He was sentenced in 2012 to 5 to 15 years.

It is believed that Simpson left the facility with a black lab mix dog.

Both inmates were discovered missing Sunday night following a facility count. Local law enforcement have been notified and area residents were alerted as soon as the escape was confirmed. Additional staff were called back to the facility, and a full facility search took place. The inmates were not found on-site.

A stolen vehicle was confirmed Monday morning, a city of Newcastle work truck. The vehicle theft is being linked to the escape. The vehicle is described as a tan cab with white utility bed. A mini yellow light bar is fixed to the roof and unit #71 is on both sides near the doors.

If the escapees or the vehicle is seen call law enforcement immediately. Reports may be made to the Newcastle Police Department at (307) 746-4486, or call your local law enforcement or 911.

Green and Simpson should be considered dangerous and should not be approached. If seen call law enforcement immediately. Reports may be made to the Newcastle Police Department at (307) 746-4486, or call your local law enforcement or 911.