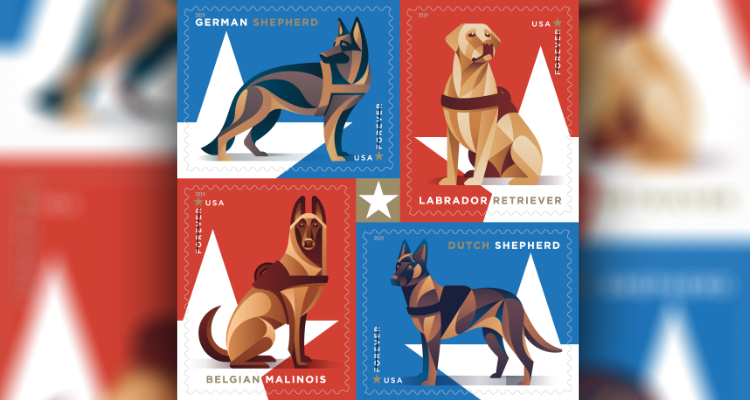 NATIONWIDE – The U.S. Postal Service will honor the nation’s brave and loyal military working dogs with this new booklet of 20 stamps, as part of an upcoming 2019 stamp collection. The pages of the booklet will each contain four stamps, with each stamp featuring one of the common breeds of service dog — German shepherd, Labrador retriever, Belgian Malinois and Dutch shepherd. The dogs will sit atop a white star with either a red or blue background. The colors red, white, blue and gold were used in the illustrations to represent the American flag and patriotism. Art for the stamps was created by DKNG Studios and designed for the stamps by the Postal Service’s art director Greg Breeding, according to the release.

Military dogs have served in the US Armed Forces since World War I. There are an estimated 2,300 military working dogs currently serving on US bases across the globe. The dogs preform dangerous tasks alongside the soldiers, utilizing their keen sense of small and smaller size to preform searches and rescues.

The USPS says that more details are expected to be released closer to when the stamp booklets go on sale.