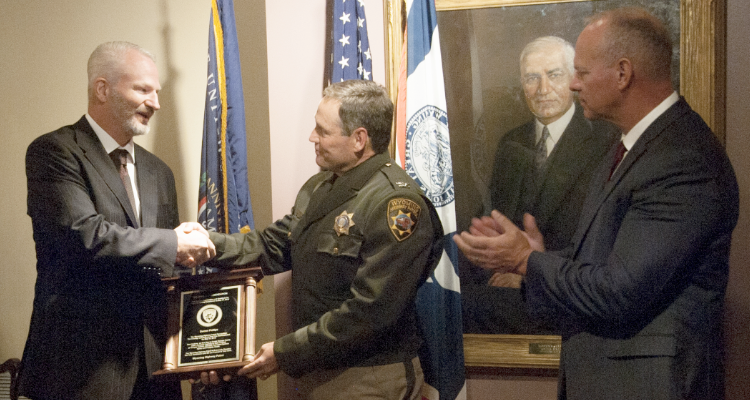 Cheyenne, WY.   –    The Wyoming Highway Patrol awarded a Utah man the Colonel’s Commendation Award for helping to subdue a suspect who was attempting to get a trooper’s gun during an altercation on Interstate 80 in May. Darren Phillips, of Taylorsville, Utah, received the award during a ceremony in Cheyenne on Aug. 13.

Gov. Matt Mead, Wyoming Department of Transportation Director Bill Panos, WHP Col. Kebin Haller, and Trooper Josh Carris, whom Phillips assisted, attended the event to honor Phillips. “You saved one person from sustaining severe injuries and you saved not only one life but possible two lives,” Haller said. “The suspect is a habitual convicted felon and we are forever in your debt.” Panos and Mead also thanked Phillips for his heroic efforts. “Thank you for the example you’ve set for the people of Wyoming,” said Mead. “Your decision to stop and lend assistance means you have saved lives.” Panos agreed. “For you to stop not knowing what the situation was and help is a remarkable reflection on you as a person,” Panos said. “We are honored that you offered your assistance to our family and helped someone in need.”

The incident occurred on May 31 near Green River after Carris stopped a vehicle on I-80 for a moving violation. After talking to the driver of the vehicle, Carris informed him that he suspected that the vehicle was involved in criminal activity. Carris then deployed his drug detection K-9, Zoey, who alerted to the odor of illegal substances in the vehicle. The driver attempted to flee and ran into traffic on I-80 after Carris tried to detain him. Carris risked his own safety and pulled the driver back out of the lane of travel. That’s when the driver fought with Carris and attempted to take the trooper’s service weapon. “Mr. Phillips was driving a semi tractor-trailer and saw the altercation,” Haller said. “Mr. Phillips, a retired Marine, then stopped his vehicle to offer assistance and help Trooper Carris.”

When Phillips ran to where Carris and the driver were, he immediately knew something was wrong. “The trooper looked at me and said, ‘He’s going for my gun,’” Phillips said. “They both had their hands on the trooper’s pistol. I just immediately thought, I need to get this guy off this trooper. That’s when my military training kicked in.” Phillips used a choke hold on the driver, which he learned from the military, to restrain the driver.

Phillips served in the U.S. Marines for 14 years and then in the Army National Guard for an additional 12 years as a Black Hawk helicopter crew chief. He also served two tours in Iraq with the Black Hawk helicopter crew. “I got behind the suspect, put my arm around his neck, stood up and fell back and got the guy in a choke hold,” Phillips said. “I made sure I didn’t let go.”

Carris and Trooper Chancey Duncan, who arrived on scene to assist, then apprehended the suspect. “He saved my life,” Carris said of Phillips. “The suspect and I were fighting for my gun. Mr. Phillips stopped and assisted me and I’m grateful for his assistance.” Phillips said that he decided to stop because he saw a trooper in trouble. “No one else was stopping and I thought, ‘I got to stop and help,’” Phillips said. “The men and women of law enforcement are the real heroes out there. I’ve dedicated my life to serving my country and this was the least I could do.”