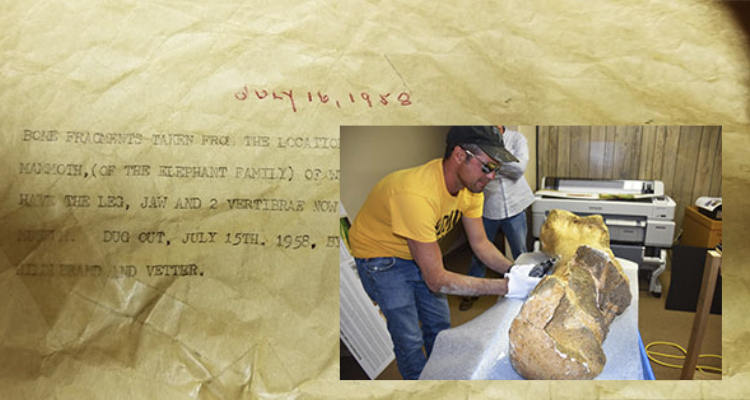 Surovell, fellow UW Professor Bob Kelly, doctoral student Madeline Mackie and their summer field school have been searching for a Mammuthus columbi (commonly known as a Columbian mammoth) kill site in Converse County for four years. The researchers have slowly been able to narrow the search radius to a small section of land and believe they are very close to a find, but are now asking for the public’s assistance with information.

Surovell’s mammoth mystery started on a rainy day in 2014. He and the summer field school participants descended on Douglas to continue excavating a separate mammoth kill site along LaPrele Creek. The rain forced the researchers to delay the dig and, by chance, they decided to visit the Wyoming Pioneer Memorial Museum in town. There, Surovell noticed a display of a mammoth’s mandible, humerus, radioulna and teeth that said the bones had been found nearby. Surovell’s interest was piqued, and a discussion with museum Director Arlene Ekland-Earnst saw her produce a letter related to the bones on display.

The letter, dated June 21, 1958, was from Loren Clark (L.C.) Bishop to Wyoming State Geologist Horace Thomas. Bishop, the Converse County land surveyor, had found the mammoth bones on his property around 1938. At that time, he dug several bones out, but he caved the bank over the rest of the find, which included several feet of exposed vertebrae, according to him. The letter goes on to give location details and asks Thomas to provide professional assistance with the excavation of the bones Bishop believed were still there 20 years after his initial find.

Surovell also believes those bones might still be there — enough that he and his group have been hunting for the site each of the last three summers. The summer of 2016 was initial reconnaissance, while a visit to the county assessor’s office in the summer of 2017 allowed him to pinpoint the land Bishop owned. That summer, he also radiocarbon-dated the humerus of the mammoth, which places the animal’s life (12,694 to 12,863 years ago and within 100 years of the LaPrele mammoth) during the Clovis period and right in the time frame that humans could have killed it. Surovell’s interest grew further.

This summer offered more clues when the museum’s current director, Mel Glover, located a small brown paper bag of mammoth bone fragments with a label saying they had been dug from Bishop’s site July 15, 1958, by Bishop, (no first name given) Hildebrand and (no first name given) Vetter. Did Bishop not receive the assistance he requested in his letter to Thomas? Again, Surovell felt more and more the bones were out there waiting to be found.

Surovell and company narrowed the search to a 30- to 50-yard stretch of land this summer and made their first major dig by testing the age of the soil. The results of those tests haven’t returned, but the group did find an archeological site of stone tools on the last day of digging.

“I feel like we have done everything we can to try to narrow down the location to the most likely place, and we missed it on our first try,” Surovell says. “I don’t know if we missed it by one foot, 10 feet, 10 yards, 100 yards or 100 miles.”

Surovell inches even closer with one last clue. The mammoth bones on display at the museum are accompanied by a placard saying the site was discovered by R.T. Bird, of the American Museum of Natural History, and the bones were a gift of William R. Eastman. No mention of Bishop. Surovell learned through letters between Bird and Eastman in 1938 that Eastman had requested help digging up a mammoth as well. Bishop apparently at some point had given the bones he found to Eastman, who at some point gave them to the Douglas museum. Bird did visit Eastman in 1938 but reported back that he was unable to find more bones. Eastman eventually became the owner of Bishop’s land where the mammoth is supposedly located, but the relationship between Bishop and Eastman is unclear.

So that leaves Surovell agonizingly close to a mammoth kill site and with four names of presumable Douglas residents around 1958: L.C. Bishop, William R. Eastman, Hildebrand and Vetter.

“Given the clues, I feel like we are really close, but it’s the kind of thing where there could be someone in Douglas who could point exactly to the right spot,” Surovell says. “If one of these people is still alive or one of their kids who went out with them, they could potentially take us right to the mammoth. It’s a super fun little scavenger hunt.”

Why put so much time and effort into finding the bones of just one mammoth? Mammoths lived in Wyoming from about 2 million years ago up until they went extinct around 12,700 years ago, which is shortly after the arrival of the first human. Roughly half of the mammoths that have been found in Wyoming are associated with and likely killed by humans, so any time another mammoth is found, there is potential that it’s an archeological site — and that humans interacted with the animal.

“We’ve been doing archeology in North America for roughly 150 years,” Surovell says. “We have 15-16 sites where humans interacted with mammoths. It’s a really, really rare thing, which is why I’m willing to chase it down. From all of North America, we have about 30 sites that have any evidence of humans interacting with the various species living on the continent at that time. Every opportunity you have to dig one, you should take advantage of that. So here, even just the possibility of a mammoth kill by humans, I’d do anything I can to try to find it.”

That’s where Surovell is asking for the public’s help. Are you related to or did you know L.C. Bishop, William R. Eastman, Hildebrand or Vetter? Does Bishop’s mammoth or the kill site ring a bell? The next clue might be the one to help solve this mammoth mystery. Email Surovell at surovell@uwyo.edu or call (307) 766-5136.