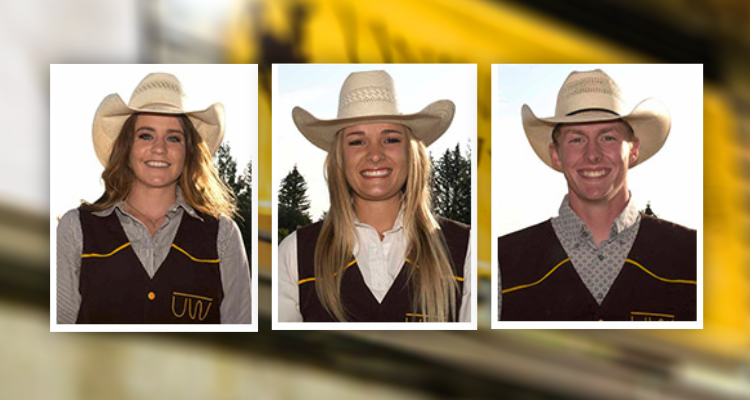 Getting back to that tradition of competing for regional championships year in and year out in the same season hopefully will be the norm for the Cowboys and Cowgirls, according to first-year head Coach Beau Clark.

A late-season charge saw the Cowgirls win the final three CRMR rodeos in the spring season, while the Cowboys took the team lead in the opening weekend of the fall season back in September and never lost the top spot, essentially wrapping up the team title earlier this spring.

For Clark and his teams, it marked the first time in 13 years that both UW clubs won the regional title the same season. And it was that long ago when the Cowboys last won a CRMR championship.

“It’s pretty exciting for this group of kids. We want to get back to that tradition of competing for regional titles for both teams,” Clark said after Sunday’s final round of the 70th annual Laramie River Rendezvous Rodeo at the Cliff and Martha Hansen Livestock Teaching Arena. “It’s pretty exciting for our students, and I know they’re pretty proud of that.”

Calvo adds that she was proud of her teammates for coming back strong late in the season to claim the team championship. The Cowgirls lost the team lead on the last fall rodeo and, at one point, slipped to third place in the regional standings after a slow start to begin the spring.

“It’s been a truly incredible run. I’ve never seen a group of girls work so hard at something that they love to do,” says Calvo, who qualified for her first CNFR. “We’re here morning, noon and night grinding it out, trying to get better. It inspires me, and it makes me want to work harder. We’ve all earned this.”

Clark says, when he took the UW job, he told team members that they were going to be one of the hardest-working teams in the country.

“I tried to teach them the basic fundamentals and, if they did, I told them they would be successful,” he says. “I think our kids did a good job doing that all year.”

Calvo’s personal run to regional barrel racing champion in her second season at UW began in high school when her dad took her to a bull sale in Bertrand, Neb.

“At the sale, my dad saw this horse, and he wanted me to buy it. I really didn’t want her; she was ugly and fat. I said, ‘I really don’t know what you’re thinking, Dad.’ If I’m going to buy a horse, I’m going to buy something that I like,” she says. “My dad has an eye for horses, and he told me, ‘You’re buying this horse. You’re writing the check and you’re buying it.’ And I did. She is the best $2,000 investment I’ve ever made, and she’s been on this incredible journey with me since I was in high school.”

A good barrel racing horse can cost tens of thousands of dollars.

Calvo won the opening round on Stella and wound up second in Sunday’s barrel racing average.

Teammate Teisha Coffield joined her as a regional champion, repeating in breakaway roping. Coffield, a Yuma, Colo., senior, also won the women’s all-around by scoring more than 200 points this season in both roping and goat tying.

She was third in goats in the final rodeo of the season, and won the opening round of breakaway roping and had a no-time when she short-armed her throw in the finals.

“I guess I needed a longer rope,” she told her family in the stands after the event.

Two UW men finished first and second in the all-around: Seth Peterson, a Minot, N.D., junior, and freshman Caden Camp, of Belgrade, Mont. Peterson was the No. 2 tie down roper in the region. Camp finished as the region’s second-best header in team roping and also was named the region’s rookie of the year.