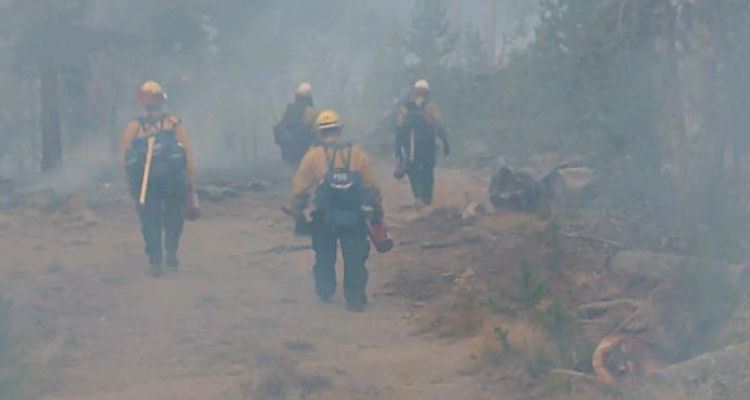 The university is coordinating with other emergency units responding to the estimated 176,000-acre blaze, which is 34 percent contained. The fire is one of the largest in Wyoming’s recent history and began Sept. 17. Nearly 1,100 firefighters currently are assigned to fight the fire.

As of Monday, the fire has destroyed 65 structures and forced 1,440 people to evacuate.

UW’s Cliff and Martha Hansen Teaching Arena, located west of Laramie on Wyoming Highway 230, is now the command center and basecamp, which offers additional comfort/protection for the firefighters. The facility has become a small firefighting city, with hundreds of pieces of firefighting equipment and tents set up inside the arena. The university’s Research and Extension Center facilities west of Laramie also are being used to set up firefighters’ tents.

“Those guys are genuinely grateful for the ability to get in out of the wind and cold they were facing at Sodergreen, the previous basecamp site,” says Bill Mai, UW’s deputy vice president for administration.

“He and his folks have really made the firefighters’ lives a lot better in the midst of the weekend storm,” Mai adds. “They are tired and hungry, and they don’t need to be cold and wet on top of that.”

Tyson Drew, the facilities manager for UW’s Department of Athletics, has similarly “gone above and beyond” to make the Arena-Auditorium concourse available. Nearly 70 firefighters were housed in the arena earlier in the week.

“This, in the midst of having all of the last-second major adjustments in athletics scheduling, Tyson, likewise, has helped the firefighting community out in ways he probably doesn’t even comprehend,” Mai says.

“We appreciate the level of engagement the University of Wyoming has had with our team since day one,” says Southern Area Blue Team Incident Commander Mark Morales. “This existing relationship helped our team meet a critical need in a short amount of time.”

Mai says firefighting crews have had to quickly make major adjustments coming to Laramie in an attempt to contain the Mullen fire. He says many of the fire crews have been “living on the edge all summer” fighting the various large fires throughout the West. Now, it is October, near the end of normal fire season, and fire personnel are experiencing the wind and cold.

“They are fighting a fire that threatens so many homes and structures, and all of the associated infrastructure, in some pretty unforgiving terrain,” he says. “This situation really has asked a lot of what has to be some pretty weary folks. The fact that UW could have a role in making their burden a little lighter by providing some weather relief really has recruited a completely new cadre of Cowboys into our fold. Tyson and Travis deserve a lot of that credit for stepping up when they, themselves, have been asked to go above and beyond for quite a while, too.”